Currently, the University of Missouri-Columbia has seven construction projects being worked on throughout campus according to the campus facilities department. With the increasingly important goal of providing a top-notch campus to attract students worldwide, construction has seemed to be the one constant over the past decade. Though the end results of these projects represent an overall improvement in current building quality and aesthetics, the long construction process provides burdens to both the student and the local environment for the short and long term. Whether it is road closing and detours that affect transportation or digging up native soils that provide habitat to the biological campus community, construction leaves a long-lasting footprint on the soils and local natural resources.

Made soils are fabricated soils at commercial and residential sites that have been altered from their natural state through development and transfer. These mixed and altered soils are very prominent at construction sites due to soil fill or removal and equipment/machinery movement on the surface. These effects produce damaged soils that have uncharacteristic fertility, pH, compaction, pollution, trash and debris levels, and drainage capacities. Made soils can penetrate a profile both horizontally and vertically, causing unnatural levels between mixed and crushed layers and deeply affecting the application potential of regional soil maps by bringing in foreign material. As native soils are typically stripped and removed from a construction area, compacted clay soils that are more compaction prone are the usual replacement. As these made soils are dumped on the surface, impenetrable transition zones are created that make it difficult for plant roots to become healthily established.

A major effect that construction has on soils, whether native or made, is compaction, which can provide a lot of negative results on an area. An ideal, healthy soil has around 50% of its volume occupied by organic soil particles, leaving the other half to be filled by air and water spaces. Compaction involves increasing the density of a soil as more particles are pressured into occupying less space, increasing the mass to volume ratio and altering soil characteristics. Detailed below, the figure on the left shows the arrangement of a healthy soil and the figure on the right shows the deep penetrating results of compaction.

Compaction is mainly caused by human traffic from agriculture practices or construction, and greatly impacts aeration, infiltration, and drainage capabilities of the soil. As pore spaces are decreased, a lower oxygen/gas/nutrient exchange occurs within the soil, along with excessive water movement on the surface, less fluid movement within, increased soil strength, slower plant root growth, and a smaller population of micro-organisms. Though sometimes done on purpose for desired local stabilization effects, generally compaction is a natural byproduct at sites of human development that causes adverse environmental effects.

Surface compaction occurs in the top 8-12 inches of a soil profile, and has a large overall effect on changing soil properties. A crusting of the soil surface can be witnessed with surface compaction, and is an important limiting factor for water infiltration. Excessive surface soil compaction takes away the ability for water and air to move throughout and into the soil pore space. Taking a moist silt loam as an example, a doubling of the pressure exerted on the soil causes a ninety percent reduction in infiltration ability. Silts and clays have finer textured soil particles, and already small pore spaces shrink with greater ease than with sandy soils. As these vulnerable soils are most commonly used at construction sites for remediation, the effects of compaction can alter previously healthy areas. The resulting decrease in infiltration capability causes a slower recharge of soil moisture with rainfall or irrigation, and causes water to pond at surface depressions for long periods. As the soil is unable to replenish its healthy state, more surface runoff occurs that steadily increases erosion rates in an area and further affects plant growth.

Subsoil compaction, which occurs throughout a soil profile, is more serious in terms of lasting damage sustained and is caused by total load (from a building) plus temporarily applied pressures (from trucks at construction sites) on the soil. Crusting characteristics common of surface compaction remain a factor even as damage reaches deep in the profile. As permeability is decreased multiple feet from the surface, the rate at which water can enter the soil is further altered causing a decrease in bioavailability for internal life deep under the surface. This unfortunately represents an effect of the majority of construction projects and modern development, and remains difficult to remedy. 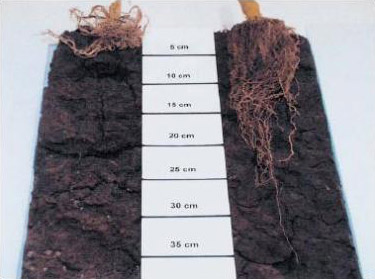 Urban growth greatly alters the natural environment of an area, and forces native plant and animal species to adapt to changing conditions. Though compaction problems also arise from other practices such as excessive agricultural tilling, heavy construction equipment and the load of supporting buildings remains the most widespread cause. By pushing the load of a soil past its carrying capacity, all chance for life beneath the surface virtually disappears. As seen in the picture below, plant roots have trouble penetrating the crusted, impermeable layers, and existing life is harmed as it is literally crushed and robbed of air and water resources. As these plants are suddenly forced to live in an oxygen-free environment, anaerobic respiration replaces aerobic processes and reduces photosynthesis and energy production potential. Symptoms common in affected plants include chlorotic leaves, small size, protruding surface roots, insect or disease infestation, and dying branches. For successful tree and plant growth, the effects of made soils at new or former construction sites need to be fully understood and investigated throughout a profile.

Whether considering the University of Missouri campus or any other site of agricultural or urban development, soil compaction poses a difficult dilemma. Once the ground is initially compacted, reversing the effects become an expensive and invasive process. Applying a layering of mulch-such as straw, wood, or other organics-can help to minimize any existing damage by helping the soil retain moisture and nutrients. Bringing worms into the area can also prove beneficial as they facilitate the transfer of surface nutrients and oxygen throughout the subsoil by tunneling. As oxygen and water content increase with remediation techniques such as subsoiling, populations of micro-organisms and plants can once again thrive.

Prevention and awareness remain the best deterrent for harmful soil compaction that results from construction. When planning projects, there are many factors that need to be considered in order to minimize damage to the land, including local soil properties and existing plant life. Because of the particle lubrication provided by moisture in a soil, construction should only be started on a dry soil. Protective barriers can be installed around existing plants at a site and surface traffic must be minimized to avoid widespread and permanent damage. Though eliminating all pressure on the soil is highly unrealistic, the best way to manage soil compaction is to keep it from happening in the first place.

Image Credit: The Groundbreaking of Memorial Union, 1921, from the MU Archives.

For more information on the causes, effects, and remedies of soil compaction, see the following sources:

Lichter, John M. and Patricia A. Lindsey. The Use of Surface Treatments for the Prevention of Soil Compaction During Site Construction. Journal of Arboriculture 20(4):July 1994.