One-hundred thousand tons of soil per square mile per year: that is the amount of soil lost due to erosion originating from construction sites in the U.S. This statistic is from 1967 before regulations were established to address construction site erosion; however, there are still significant losses from construction sites everyday. Soil erosion has various detrimental impacts that are both environmental and economic and occur on and off-site. The United States Department of Agriculture called soil erosion the most damaging factor to soil and environmental quality in an urban area, and it is an issue that is often overlooked by developers and loosely enforced by regulatory authorities. College campuses are generally highly developed areas with continuous construction; therefore soil erosion must be carefully managed, right? Are college campuses, such as the University of Missouri, controlling soil erosion or turning a blind eye?

The University of Missouri campus has the potential to generate significant amounts of sediment from construction sites. With a steadily increasing student body and need to remain competitive in higher education, the University of Missouri constantly implements construction or renovation projects. For example, the campus master plan outlines numerous construction projects to occur within the next several years. The universitys main campus occupies 1,350 acres of land with structures covering 13,853,987 GSF (Gross Square Feet), just about doubling GSF since 1982. The acreage of campus that is developed covers 882 acres, with 516 of that being softscape and the remaining 366 acres impervious surface. With widespread and continuous development, the impacts of construction and potential for soil erosion are great. But what are some of the impacts? 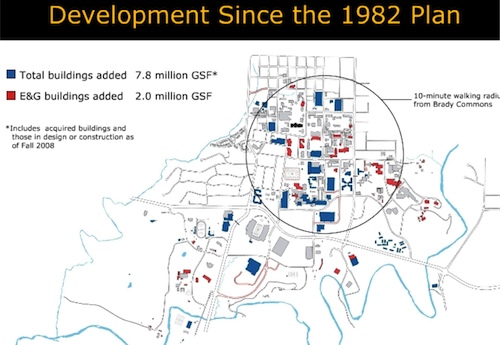 Fig. 1. A campus map displaying the development of new structures (in red/blue) since 1982.
Taken from the Campus Master Plan 2009.

Soil erosion causes harm on and off-site. On-site impacts are confined to the local area where as the damages caused by off-site impacts are felt by society at large. The most harmful on-site impact is the actual loss of topsoil by removal for construction or wind/water erosion. This layer of soil is essential for soil quality considering the high biological activity, high organic matter content and available nutrients. Ecosystem services, such as the nutrient cycling and regulation of water flow, are inhibited with the removal of topsoil. The finer particles that hold nutrients are carried off-site by erosion. Furthermore, with less organic matter, soil bulk density can increase resulting in compaction. Water infiltration rates are decreased with compaction. The negative impacts on soil affect the soils ability to produce vegetation, increase drought susceptibility, increase the need for soil amendments and facilitate more erosion.
Off-site impacts of erosion from construction sites are a function of watershed principles. Without the implementation of BMPs (Best Management Practices) rain events carry soil and other pollutants from the urban areas into streams, rivers and subsequent water bodies. This process does not only result in environmental degradation, but also economic losses. Nutrients and sediments are the most prevalent threats to water quality in the United States. Excess nutrients may cause eutrophication, degrading the aquatic ecosystem. Sediments increase turbidity which causes a long list of problems for aquatic life. Also, sediments often concentrate in runoff channels leading to flooding events from clogged waterways. 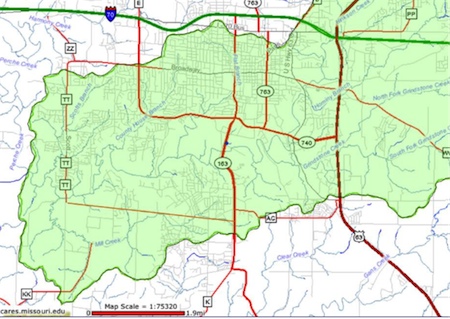 All of these off-site impacts have associated economic burdens which are usually put on taxpayers. For example, sediment build up must be removed, structures are built to control run-off and sediments, costs flood damages and structures to control floods, costs of cleaning up polluted land and waters and also the decreased aesthetic value of a degraded environment.

Considering the campuss potential to generate erosion and the possible detrimental impacts, we can delve into the questionWhat does the University of Missouri do to mitigate soil erosion and is it effective? In some regards, the university diligently manages erosion from construction sites, but there are aspects that need improvement.

The University of Missouri possesses several advantages to manage development: they are their own regulating authority for construction, they can cut off funding/break contracts with developers and there is a finite area of land to develop thus requiring careful planning. New land disturbances/developments of one acre or greater require various permits and are subject to inspection. To obtain a permit, a soil erosion control plan must be drafted. The erosion plan outlines the Best Management Practices (BMPs) and it must be kept current and posted at the site. Once a week, or after a rain event of at least ½ inch, the plan is inspected by campus facilities. If non-compliance is observed, the developers have three days to respond to the problem before penalties are incurred or the university takes action to fix the violation.

Considering erosion is the primary concern with construction sites, a storm water pollution prevention plan must be submitted prior to construction. This plan considers the fate of runoff and outlines the BMPs that will be implemented.  Common BMPs include silt fencing, straw bales, rock dams, mulching, temporary berms, sediment basins and vegetation. A good portion of campus drains into the Hinkson Creek, an impaired waterway on the 303d list. Manager of Construction Administration for the University of Missouri, James Heckemeyer, ensured extra measures are taken when a site flows into the Hinkson and however, that is not to say sediment and pollution from campus doesnt enter the creek. With rain events of four inches it is difficult to prevent erosion with common BMPs. Assistant Director of Environmental Health and Safety at the University of Missouri, Todd Houts, asserts that the storm water permitting process has little teeth and much work is needed in updating this systems infrastructure and policy. The goals are lofty and lack specific requirements.

Contractors are subject to all requirements issued by the Department of Natural Resources and Boone County. However, it is much easier to regulate a college campus than it is the entire state, therefore, enforcement actually occurs. As James Heckemeyer, stated, we can look out the window driving to work and see if there is anything going wrong. The university has had little non-compliance issues regarding soil erosion control and has only had to cut-off funds from one project.

It seems soil erosion is managed fairly well during construction, but are soil properties taken into consideration pre-construction? The answer is yes and no. Soil boring is performed in order to establish that the soil and geology are suitable to support the proposed structure. However, no soil tests are completed nor are impacts on the soil considered which can vary depending on soil properties. The topsoil is actually disposed of and not re-used during construction projects. For small sites, the university operates a clean fill site on campus for soil disposal. Large projects require the contractors dispose of the excess soil off-site.

The University of Missouri appropriately manages soil resources on construction sites, however, improvements can be made. Such improvements might include an environmental assessment of the land and how it will be affected by the construction in the short and long term. This could mimic the EPAs Environmental Assessment of Environmental Impact statement, however on a smaller scale and simplified, which considers the effects on all aspects of the natural ecosystem. Regarding soils, the soil properties (e.s. structure, texture, drainage) should be considered which can provide insight into how the site should be developed, designed and maintained. Long-term sustainability and post-construction BMP are generally not considered with development on campus. Other improvements relating to construction sites include revising storm-water policy and integrating storm-water infrastructure and low impact development principles. These may be as simple as a rain garden or as large as a constructed wetland. However, relatively speaking the University of Missouri should be applauded for their efforts in reducing the impact of construction on environmental quality, but great strides must be taken to work towards sustainability of our soil and water resources.

For further information on construction impacts on soil: