A pile of apple cores, melon seeds, half eaten bread, corn kernels, and broccoli wait on a curb in black trash bags. But this food waste has a different destination than similar trash bags. Instead of being transported to the landfill with all the other dining hall garbage that comes from the University of Missouri in Columbia, Missouri, these food scraps will be picked up and taken downtown to the corner of St. Joseph and Ash Street to be composted and then returned to the soil.

This food scraps/compost partnership involves the University of Missouri (Mizzou), campus dining services, and the Columbia Center for Urban Agriculture (CCUA). This program is maintained through the help of a service learning class. The program works like this: when trays in Rollins Dining Hall are turned in with scraps of food, all the food that is compostable is separated and put through a pulper. The scraps are then bagged and set outside. Volunteers and students in the service learning class ride to the dining hall by bicycle and pick up these bags on bike trailers. The food is then transported to the Sustain Mizzou Research Farm and is then spread out within compost bins. The scraps are layered with manure and straw to help in odor abatement and decomposition. After the food scraps, manure, and hay mixture has decomposed and become stabilized, the compost is added back into the soil of the farm to help maintain levels of organic matter in the ground.

Conservation and augmentation of soil organic matter is essential for good soil quality. By having increased amounts of organic matter, soil structure becomes more stable, erosion is reduced, water infiltration increases, surface water runoff decreases, the amount of biological organisms in the soil increases, and the soil becomes a better filter in general. All of these qualities combined can improve poor soils or make healthy soils even better.

Composting can help replenish the soil’s natural organic matter and nutrients as well as offer many other benefits to the ecosystem. The Environmental Protection Agency cites some of these benefits as being able to help suppress plant pests and diseases, promote higher crop yields, filter contaminated soils while also decreasing the bulk density of compacted soils.

Method to the Madness

Compost production requires several practices that make the process the most beneficial and productive for soils. One principle of compost production is that only certain types of food can be composted. The basic rule of thumb is that all food can be composted except for meat and dairy products. Another important aspect of composting is monitoring and maintaining the temperature that the compost pile achieves. The pile heats up due to a by-product of the microbial organisms within the pile breaking down and digesting the organic matter. This temperature has to be closely monitored. If it gets too high, the microorganisms will actually be killed, but if it doesn’t get high enough, weed seeds, thermosensitive pathogens, and fly larvae will survive and run the risk of contaminating the soil. Small particle size of the organic materials used in compost, aeration, and moisture content of 50-60% are also optimal conditions for prime compost. 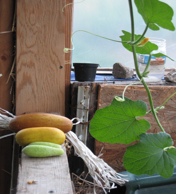 Cucumbers grown inside the Sustain Mizzou Research Garden’s greenhouse. The compost gives the garden the nutrients it needs to be very productive.
Photo by Caroline Tanner

Out of the Landfill and into the Soil

The university’s donation of food scraps to the CCUA not only gets reusable waste out of the landfill, but it also offers the opportunity to replenish the local soil with essential nutrients by incorportating compost in them. These nutrients are what help the Sustain Mizzou Research Farm to produce the quantity of food that is does. What was once a vacant lot, covered in glass shards, has now become a small but highly productive plot of land only two blocks north of Broadway.

Solid Waste Management estimates Mizzou’s annual solid waste as 8,042 tons. Of that, 550,000 pounds to 1.1 million pounds may be food waste. The food scraps that are donated to the CCUA is up to 1,500 pounds of food a week. That is 1,500 pounds of waste that is being saved from our landfills and going back into the soil. And those are just food scraps from one dining hall. Imagine how much food waste could be turned into healthy soil additions if all six campus dinning halls were to contribute to this project.

One reason that is often given as to why food scraps are not being collected from all the dinning halls is that Rollins Dining Hall is the only facility with a food pulper. This device chops up the food into smaller particles, spins it dry, and then dumps the food scraps into a trash bag. From here it heads to the compost bins. However, besides the smaller particle size which would aid in the decomposition of the food scraps, Bobby Johnson, active contributor to the CCUA and a main contributor to the success of this project, says that a pulper is not necessary. The pulper required the food to be separated anyway, so there was just a little bit of change required argues Johnson. He also states that as long as the food was separated, regardless of being pulped or not, the scraps could be composted properly. If this is true, all of Mizzou’s dining halls have the possibility of composting their scraps with just a little extra time put into separating food scraps.

A Class for Compost

Urban Sustainable Development in Columbia, Environmental Studies course 2150, is the service learning class that is responsible for this composting project and maintaining the Sustain Mizzou Research Farm. Students in this class are charged with the duty of picking up food scraps from Rollins and turning them into rich, decayed organic matter.

This class covers a wide range of subjects, such as garden management, raised bed construction, composting, winter season harvest, and rain barrels. However, composting is one of the classs main focuses. The students learn about the techniques of building a functioning compost pile, such as the layering of the food scraps and whether tilling the pile is necessary.  This simple education about composting is eye-opening for some of the students. As Luke Wimmer, student and environmental science major, states, I’ve developed a good respect for compost. I didn’t realize it was a good way to recycle organic waste.

The material covered about composting does not only focus on compost methodology.  Johnson, former teacher of the course, says that students also learn about soil, including ideas of soil quality and nutrient cycling. 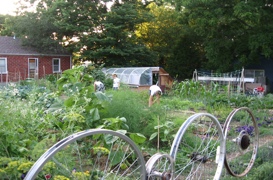 Students and volunteers hard at work in the Sustain Mizzou Research Farm.
Photo by Caroline Tanner

Regardless of how in depth the class goes into soil properties, the importance of soils is most obviously stressed. While discussing methods to keeping soil healthy over winter, Johnson states, Clover’s good. Mulching is good. It’s all good because it saves the dirt. We can kill every plant in this garden and its ok because we still have the dirt. Johnson realizes that as long as there is healthy soil with ample amounts of organic matter, virtually anything can be done with that earth.

Looking to the Future

The future looks bright for the CCUA. They have recently acquired two more pieces of land to expand their garden and compost operation. Educational programs for local schools and workshops for the community are on the organizations upcoming agenda. They will also continue to work with Stephen’s College in obtaining manure for their compost. Starting next week, Columbia College will join this partnership by donating their food scraps as well.

However, this coming December, food scraps from Mizzou will stop being given to the CCUA for composting. Due to the closing of Rollins Dining Hall, the only dining hall out of the six on campus that separates their compostable food from non-compostables, food waste from the university will be insufficiently separated for composting purposes. After Rollins Hall closes, all of Mizzou’s food waste will be joining the rest of campus’s trash and going to landfill.

Find more information about CCUA and the opportunities they offer at their website.
http://columbiaurbanag.org/

The EPA offers some good guidelines to composting.
http://www.epa.gov/waste/conserve/rrr/composting/basic.htm

Take a look at an article about the research farm written by a fellow student at Mizzou.
http://mizzoumag.missouri.edu/2009-Spring/features/compost/index.php