Your blood turns cold. Your eyes become blind. Panic hits and all of a sudden air wont enter your lungs quite as easily. In the dead of the night of December 3rd, a noise resembling the pain of thousands of people was heard throughout Bhopal. People awoke to find themselves trapped in what seemed to be a gas chamber. Outside, people ran desperately trying to find relief to their pain. But, distressed occupants of Bhopal passed their wakeful nights under the most dreadful terrors imaginable. A release of deadly MIC, from a pesticide plant nearby, ruined the health of many people, and death ensued.

The city of Bhopal lies on the edge of a large lake almost exactly in the center of India. It is the capital of the region, and it is growing at a phenomenal rate. With a population of almost 1.4 million, it is considered to be a busy, energetic, and lively place. Yet, on the 3rd of December 1984, Bhopal was the scene of a catastrophe on an unpredictable scale as at least 3000 people choked to death in a cloud of gas (Baldauf, 2009). Many times that number survived that night, only to have their livelihoods destroyed.

Disasters rarely just happen; theyre the results of sequence of events, looped together in time. What took place in Bhopal ended up being seconds that shocked the entire world. The Bhopal disaster is known as the worlds worst industrial accident as it unexpectedly occurred in the middle of the night. In just a few, but terrifying hours, thousands of people lost their lives. This disaster was started at an American-owned pesticides plant (Figure1). Built by Union Carbide, a giant multinational corporation, the factory manufactured pesticides and had been producing them for many years without any problems. These pesticides were produced as India desperately struggled to provide enough food to cope with the population explosion (Baldauf, 2009). Sevin, as the pesticide was called, worked by attacking the nervous system of insects (Monosson, 2008). However, its production required some very dangerous chemicals, and on that dreadful night of December, those chemicals got out of control.

Outside of the plant, forty meters away, the storage tank was about to deliver its deadly load. It was fifteen minutes past midnight. The contents of tank No. 610 represented the triumph of profit for Union Carbide. The exact events that led to the contamination of the tank are still disputed today (Figure 2). Nevertheless, the findings of the Indian government point to a disaster that started at approximately 8:15 P.M. on December 2nd. At this time, a plant worker began some routine maintenance. He connected a water hose to clean out the plants maze of pipe work. Keeping the system clean was vital, as contaminants could easily be formed during processing (Brown, 2009). Dirt was supposed to flush out of the system through drainage nozzles. However, a faulty valve allowed water, carrying catalytic material, to enter the MIC storage tank (Brown, 2009). That caused an explosion and the release of lethal gas into the Bhopal night air. More than 27 tons of methyl isocyanate and other deadly gases turned Bhopal into a gas chamber (Ortman, 2009). Still, this entire process would take a few hours to complete. Almost immediately, something began to go wrong; the plant worker had unwillingly started a sequence of events that would end with the deaths of thousands.

With attention to the case of the Bhopal gas disaster, decisions must be made considering how people can be protected from environmental issues. Was the need of producing pesticides higher than the need to protect people living around the Union Carbide plant? Union Carbides own documents proved that the company designed the plant with unproven and untested technology, and cut corners on safety and maintenance in order to save money (Ortman, 2009). No alarm ever sounded a warning and no evacuation plan was prepared. On the night of the terrible accident, none of the safety systems designed to prevent a leak were operational, and the plant siren had been turned off (Figure 3). The plant was not designed to handle a runaway reaction. When the uncontrolled reaction started, MIC was flowing through the scrubber (meant to neutralize MIC emissions) at more than 200 times its designed capacity. MIC in the tank was filled to 87% of its capacity while the maximum permissible was 50% (Brown, 2009). When victims arrived at hospitals breathless and blind, doctors did not know how to treat them, as the corporation had not provided emergency information. Whatever the cause, whatever the cure, the immediate result was chaos and death as MIC gas spread throughout the city.

The abandoned Union Carbide plant still exists, but has been sealed off from the outside world for many years. The plant is preserved by the Indian government as it investigates the cause of the disaster. Perhaps the most unstable artifact left behind is tank 610, the actual vessel from which the poison escaped. This tank has been dug up from its original underground location in order to investigate the events (Figure 4).

Also, toxic chemicals fill the building; these chemicals reach into and are contaminating parts of the citys water supply. The chemicals that were abandoned inside and around the factory have contaminated the drinking water of about 20,000 people. Testing published in a 2002 report revealed poisons such as 1, 3, and 5 trichlorobenzene, dichloromethane, chloroform, lead, and mercury in the milk of nursing women living near the factory (Monosson, 2008). Today, many people still arrive at hospitals every day with a history to gas exposure or contaminated water, or both. The problems most commonly found amongst these victims are diminished vision, loss of appetite, menstrual disorders, and numbness of the limbs, brain problems in the nervous system, mental problems, cancer, and leukemia (Monosson, 2008).

Initially, Union Carbide said the leak wasnt their fault. They argued that it had not been an act of negligence from their part, but a deliberate act from a dishonest employee. In any event, no proof of that claim was ever given. For years, critics had called on Union Carbide to move away from the city and perhaps to areas less vulnerable to the threat of something going wrong. Consequently the people of Bhopal demanded compensation and they sued for billions of dollars. As a result, an out-of-court settlement was reached between Union Carbide and the Indian government in 1989. More than 500,000 people were awarded compensation. The sum of the compensation was just over 2,000 dollars per family (Union Carbide Corporation, 2001). But, anger swept through the victim community; the survivors felt cheated. To the victims, the agreed upon compensation didnt fit the horror they were still living through.

Bhopal today, and more than two decades after the gas leak, the compensations are all gone. Members of a new generation of gas victims have begun their lives full of struggles around a tough and ugly legacy. In addition, survivors still face constant sickness, and it is not uncommon for new babies to be born with defects due to the leak.

Before accepting some kind of company to operate in a country, it is important to ensure that the environmental issues are the number one priority. All the safety precautions should be taken seriously and without cutting corners to save money. Also, the factory should have an evacuation plan ready for the residents near the plant. Most importantly, a siren or some kind of warning should tell people when something has gone wrong and their lives are in danger. A way for this to get accomplished is to assure that US companies operating overseas still comply with EPA. This will have both positive and negative impacts. On the positive side, the rules and regulations set by the EPA will not allow such negligence to occur in the future with plants that are using deadly chemicals in the production stage. However, the negative part to this would be that US companies will have a disadvantage when competing with other companies that will not be regulated by the EPA. This disadvantage is that the American-owned companies will be investing more money in order to have environmental justice. While other companies will cut corners in order to save money. In conclusion, a worldwide EPA needs to be established so that safety comes before profit. This worldwide EPA would have regular inspections on a company throughout the year. These inspections will lower the amount of accidents occurring throughout the world.

Sealing the plant off from the outside world has not been enough to stop the spread of the chemical. Since illness is still seen in Bhopal, the plant needs to be destroyed. By destroying the plant, Bhopal would be in less threat of illness among its people. The government should either take care of the problem themselves or make Union Carbide clean up the chemicals that have been left behind. Getting rid of the chemicals will decrease poisoning of the air and water as well.

The horrifying images of that night are sealed to the minds of those who saw them. This was a tragedy for Bhopal, but a lesson for the world to reflect on. What happened here on that December night of 1984, gave the world a name that will forever be linked to the worlds worst chemical disaster-BHOPAL! 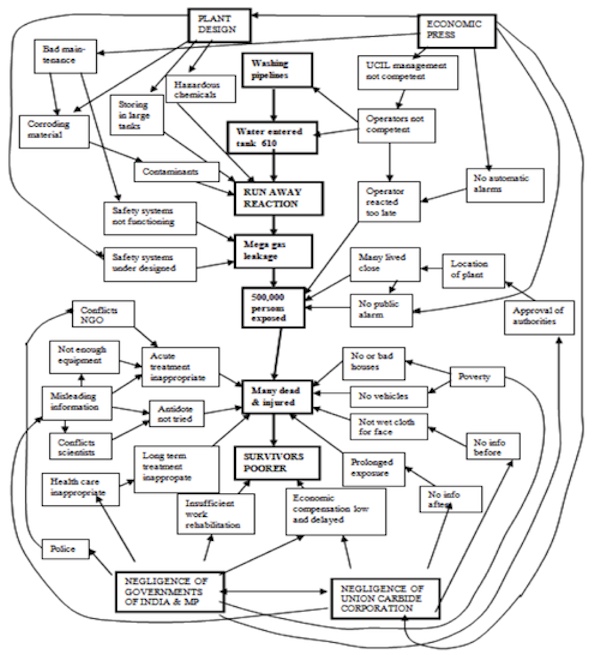 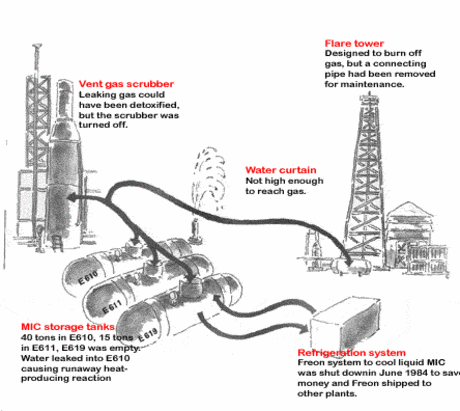 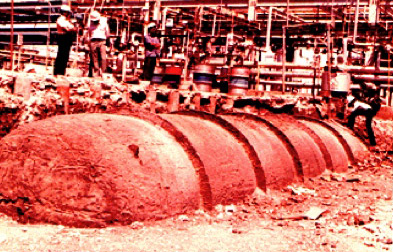