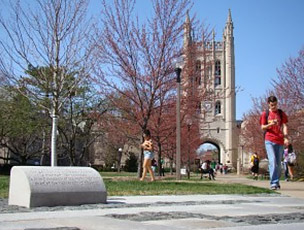 American War Mother’s Memorial: It seems fitting that this planting should be made here where our Missouri University heroes spent so many happy hours. This was hallowed ground to them. When the call of their country came, they answered bravely, heroically. They died that we might live and that their country preserve her ideals. – Mrs. G. F. Troxell

The American War Mothers memorial at MU was originally dedicated in 1930 and installed near the Brewer Field House in memory of the 117 MU students killed in WWI. At some point the stone was removed and virtually forgotten. Last fall it was dusted off and rededicated in its new location on the east side of Memorial Union. As distant as World War I seems from our lives today, this stone brings to our awareness the love and grief experienced by these mothers and so many others–a tangible reminder of the tragedies of this war to end all wars.

In this inaugural issue of Artifacts relaunch, an emerging theme of these essays, stories, and poem is the work of remembering. Some do this by drawing our attention to aspects of history that still affect us decades later even when they are missing from our daily consciousness: WWII-era racist propaganda, the Tuskegee syphilis studies, the transformative role of stage performances in early 20th century society, and the contexts of early environmental writing. Others document experiences of people today, remembering for the future challenges for women veterans, personal effects of political conflicts, the heartbreak of chemotherapy treatments, and the digital technology with which we communicate, think, and emote.

These memorials—whether chiseled stone or digital texts—remind us how easy it is to forget. Yet the past is always with us whether we acknowledge it or not. The question is how we will remember it.