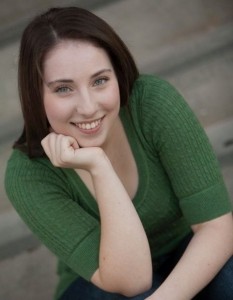 Emma is a junior at the University of Missouri, majoring in History and minoring in Sociology and Leadership and Public Service. Emma also works as a writing tutor at the Student Success Center and at Mizzou’s Athletic Training Complex. She serves as an ambassador for the Honors College, and volunteers at Bear Creek Early Head Start. This semester, Emma is an intern with The State Historical Society of Missouri, helping to coordinate National History Day in Missouri. Emma is passionate about writing and thrilled that her work is published in Artifacts Journal Issue 9! 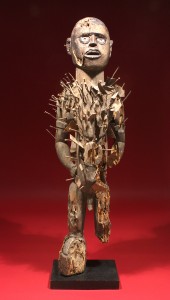 The “Nail Fetish” Power Figure (referred to as nkisi or nkonde), found in the Museum of Art and Archaeology at the University of Missouri, offers much insight into the Iron Age history of Central Africa. This piece comes from the Congo, specifically the Bakongo people. Although it was made in the 1930s, its composition and styling are similar to that of the art produced in the Iron Age. Thus, it is a useful tool in understanding practices and beliefs of the time. This nkisi offers valuable insight into the manufacturing, religious, and social constructs in Central Africa during the Iron Age.

In terms of how this piece of art is constructed, we can gain much knowledge about manufacturing practices at the time. The composition of wood, iron, glass, and paint indicates a process similar to what would have been found during the Iron Age. Though historians know that Bakongo people were advanced iron-workers, the bellows and smelter used to produce iron were fairly similar in the 20th century as they were when the peoples emerged in the 14th century (Shillington, 2012). Although this piece was probably a one-time production, its existence proves that there were specialized fields of industry, especially with regards to iron working, one of the most mystical and revered professions. Further, this piece is not practical; rather it is ceremonial. This indicates that iron working was advanced and prevalent enough to afford those in the Congo region the privilege of having non-essential items made out of iron.

This nkisi offers a wealth of information about the religious practices and beliefs of the peoples of the Congo, specifically the Bakongo people. It would have been used for divination as a part of a broader spectrum of religious figures and deities. This specific figure, as the University of Missouri’s Museum of Art and Archaeology notes, would have represented the punishment of evildoers; not hard to imagine given its gruesome appearance! For religious ceremonies, objects that hold special meaning would be put inside of the figure, often in its stomach. This is where it derived its power. Historians have noted that this reverence is not unique to the nkisi figure; many iron-crafted objects attained high status during and after the Iron Age, as the material proved both useful for practical reasons and more religious reasons (Shillington, 2012).

The nkisi’s place in society is a bit more difficult to determine. Because it was reserved for special ceremonies, it would be unreasonable to assert that it held constant sway over every-day life. However, because its existence was tied to religious beliefs that centered on the land, it would be historically accurate to assert that when used, the nkisi was a socially important figure. The form the nkisi took was socially determined based on varying needs, while the placement of the spears in the body followed religious ceremonies. For example, historians know that during the Later Iron Age, the Bakongo people were farming people, and their shrines focused on the “spirits of the land” (Shillington, 2012, p. 150). Also, given that tribes were spread out and developed individually, it is interesting to note that this religious figure was essentially directed at promoting the Bakongo people’s main form of industry.

To determine this power figure’s power over history, one need to look no further than the symbolism associated with its creation. As the museum notes, the iron objects placed in its belly merit special consideration; the Bakongo people’s language used the same word for ‘belly’ and ‘life.’ If this religious figure had the power to sustain people and their way of life, it is only fitting that it is made of iron, which in everyday life did indeed sustain this and many other societies in Africa. Seeing a meaningful religious object made of iron shows that the material was valued, but it also shows that it was not an overly-rare commodity. Certainly the use of this important material makes the nkisi significant, but there must have been a high enough rate of production to sustain such a creation without draining the Bakongo people’s supply of iron. Overall, this nkisi offers irreplaceable understanding of manufacturing, religious, and social practices in the Congo region during the Iron Age.