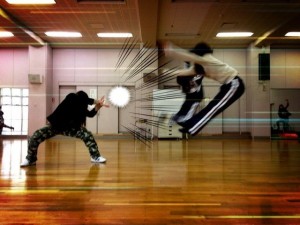 Over the course of the past few months, yet another viral trend has taken over YouTube. This time, though, the name rang familiar for many people, who were soon disappointed to find out that the Harlem Shake they were hearing so much about had very little semblance to the move popularized by the likes of Sean “Diddy” Combs (formerly Puff Daddy). Rather, these short videos are full of nonsensical costumes, pelvic grinding, and a general sense of confusion for viewers not in the loop. And, for some reason, up to 4,000 of them are uploaded a day.

The Harlem Shake video trend began at the beginning of 2013 when YouTube user Filthy Frank uploaded a short video of himself and some friends gyrating to a dance track on January 30. The video is simple: four boys in strange costumes, pelvic thrusting to a song, but for some reason it inspired others. The trend was truly considered “viral” within the first few days of February, and by February 14 the trend was receiving mainstream media coverage. At this point, there seems to be every possible incarnation of the video; armies, professional athletes, and even the University of Missouri have uploaded their own take on what is actually an incredibly simple trend. To make his or her own Harlem Shake video, one simply sticks to the formula: 14 seconds of music building up as one person dances alone in a seemingly oblivious crowd, a quick cut to 14 seconds of everyone (usually now in costume) grinding and shaking their bodies as the music continues to play, and then 2 seconds of slow-motion video with slurred audio. Of course, the overarching connection between all these videos is the song, titled “The Harlem Shake.”

Do the Harlem Shake (Original)

One may wonder what this beat-heavy instrumental track has to do with the hip-hop dance, or even Harlem itself. The track was released by Baauer in 2012. It samples a few different things – most notably a line from rap group Plastic Little’s 2001song “Miller Time,” in which Jayson Musson says “Punch you in the face/and then do the Harlem Shake,” in reference to success after a fight with a rival graffiti artist.

The Harlem Shake that Musson is referring to, by the way, is a dance move popularized in the 1980s and 1990s. The “Harlem Shake” was coined in 1981 by a Harlem resident known as “Al B” who claimed that the dance is meant to imitate the shake of an alcoholic. The dance was initially even called the “Albie” after its creator, but the name Harlem Shake caught on, and it soon became a symbol of the hip-hop of the time. Baauer’s dance song, titled “Harlem Shake” after the sample from Musson (which, incidentally, Musson received no credit for, nor even knew had been used until a fellow Plastic Little member contacted him, meaning that he has not been receiving compensation), received little attention until Diplo put it on a mixtape, which is presumably where Filthy Frank first came across. Of his video, Frank said that the way they were dancing was really just how they were reacting to the music, and that he had no idea it would take off so quickly.

A simple reason so many people have latched on to this trend is that it gives them a chance to be famous, even if only for a few minutes. Because the formula is so easy to follow, anyone with a camera, editing software, and at least two friends can make their own Harlem Shake video. This is, in and of itself, not at all problematic. Latching on to trends is certainly not unheard of in the age of digitized folklore; however, the problem lies in the name. I asked 10 friends what their first thought was upon hearing the phrase “Harlem shake,” and every single one of them thought first of the videos. I then asked each of them what they thought the connection might be between the videos and Harlem itself, and none of them had any clue, though some did guess at the original dance.

This is the issue with the video trend: the fact that because the song has adopted the name, people are now associating the phrase “Harlem Shake” with something that is truly a bastardization of what it once was. Whether or not the dance in the videos is meant to be an imitation of the true dance – which it isn’t – is not the point; the point is that people hear this phrase and no longer associate it with a ubiquitous part of hip-hop culture.

This, by itself, perhaps wouldn’t be so bad if there was not already a trend of people taking things away from black culture and giving them new meaning. This video trend is an example of appropriation – not of the dance itself, but of the name. The trend has taken “Harlem shake” from hip-hop (a predominantly black community) and given it to teenagers in the Internet. The race of the people using the folklore does not necessarily matter; what matters is that the community that is being cheated has been systematically oppressed for centuries based on their race.

In this case, people see the Harlem Shake videos and even though the videos have nothing to do with their namesake, the connection is made. They may make a subconscious decision that this is their impression of Harlem, and they definitely decide that this is what it means to do with the Harlem Shake. In the expository video “Harlem Reacts to the Harlem Shake,” residents claimed they felt mocked, disrespected, and that “they’re basically taking our dance, what we do, and making a joke of it.”

This functions not only to entertain the people making the videos but also to continue the cycle of colonization. When the majority is able to absorb something that the minority has created, they also take away power from the minority. In this case, it does not matter who makes up the majority (because, of course, not every single person that has made one of these videos is white or even American), but the fact remains that the hip-hop community is losing this piece of social commodity.

The pattern of appropriation of black culture is certainly not new; minstrel shows were a very early way of white performers taking black music and performing it. They portrayed black people in this way as inferior, immoral, hyper-sexual, and so on.On the blog Philosophy of Hip Hop, Ben Brubaker writes:

Minstrelsy also seemed to mark the beginning of a deliberate (albeit, covert) attempt by dominant white culture to appropriate Afro-Amerian cultlure through popular music, as a means of extending white hegemony through racist narratives that reinforced the status quo.

Hegemony has been developed in the United States after many years of racial dictatorship. The appropriation of the Harlem Shake falls in line with this pattern, because it continues the trend of a majority ruling over the minority based on race. Brubakergoes on to say that “whites have appropriated hip-hop, both structurally and personally … this appropriation has exploited and misrepresented hip-hop through commodification and decontextualization from its original source.” Herein echoes the problem with the Harlem Shake videos: they take away that commodity, that cultural capitol, which the black community has.

While some may argue that it’s just a dance, and it does not matter, I would counter that dismissing it as “just a dance” indicates that there is a little respect for the fact that this is nothing new. As above, minstrel shows are the earliest example of cultural appropriation of black music, but allow me to present a more recent (and still-celebrated) offender: Elvis Presley. Black musicians were almost always rejected because of the allegedly hyper-sexual, animalistic stereotypes surrounding them in the 1950s.

However, when Elvis covered these songs and moved those famous hips, girls swooned and records flew off the shelves. Record labels knew that white teenagers were interested in the “Other,” and the easiest way to make the Other accessible was to make it white. And so, by covering Arthur Crudup, Big Mama Thornton, and countless other black musicians, Elvis simultaneously built an empire and proved Hooks’ (1992) right: “Certainly from the standpoint of white supremacist capitalist patriarchy, the hope is that desires for the ‘primitive’ or fantasies about the Other can be continually exploited, and that such exploitation will occur in a manner that reinscribes the status quo” (p. 22).

This function – to experience the Other without having to actually immerse oneself in it – is another reason that Harlem Shake videos continue to be made, viewed, and shared. The people participating in this folklore – and I say people because it is hard to pinpoint one singular group that participates – wish to experience a taste of Harlem, as incorrect as that taste may be.

Sam Phillips, owner of Sun Records, famously said, “If I could find a white man who had a Negro sound and a Negro feel, I could make a billion dollars.” In “Harlem Reacts to the Harlem Shake,” an unnamed man says, of the video trend, “This would just be another thing, another vehicle for America to take and make money on. I’m sure there’s gonna be a corporate person somewhere that’s gonna capitalize on this and gonna make money off this.” These quotes are two sides of the same coin, and that coin is the unfortunate fact that white artists have – and will likely continue – to take the artistic property of black artists and gain more money and fame than their black counterparts.

Brubaker, B. (2009, June 2). White Appropriation of Hip-Hop in Post-Modern America. Philosophy of Hip-Hop. Retrieved from http://philosopyofhiphop.blogspot.com/search.