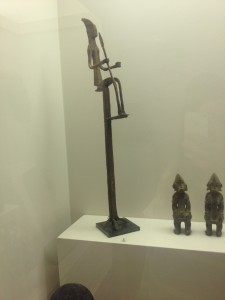 The “Ritual Staff with Seated Nommo” made by the Dogon people from modern Mali available at the University of Missouri Museum of Art and Archeology represents the rise in specialized occupations in early Africa and demonstrates the complex techniques of smelting and crafting iron, which were carried out across the continent during the so called Iron Age. Blacksmiths and metalworking were common throughout Africa since 1000 BCE. They used primarily gold, tin, zinc, and iron, but also scarce metals in the continent, such as copper, which Africans imported from Europe and Asia through trans-saharan trade routes (Shillington, 43-44). The museum’s Dogon staff was entirely made of iron in the first half of the twentieth century. However, the techniques used to build it were similar to those employed in previous centuries, allowing us to examine Africans’ progression from farmers to tradesmen and the rise of blacksmiths’ power in early Africa.

With the development of tools, weapons and material possessions in early Africa, the job environment opened up and employment opportunities outside the agricultural and/or hunter and gathering economy were available for the first time. People became specialists in their field whether it be a blacksmith or medicine man. The birth of trades within the community meant that those who maintained the agricultural and pastoralist occupations needed to support those who could no longer produce their own living supplies such as grains, fruits and meats. In exchange for a portion of this, the craftsmen were able to create tools and material possessions that the farmers could use to enrich their work or in their household. These items were varied and included decorative pieces such as statues and pottery to more practical objects such as blades and weapons (Shillington, 33). Blacksmiths held a high position in early Iron Age Africa, as they possessed the skills that few had learned and many admired and valued. Shillington suggests that the main source of evidence for the development and spread of iron technology comes from archeological sites, and that by looking at the waste slag left behind from smelting and manufacturing iron objects we are able to understand the techniques of the trade and what was involved in the process (Shillington, 59).

The earliest records of iron working have been traced back to Anatolia (modern Turkey) in around 1500 BCE (Shillington, 45). Because iron smelting is far more difficult than other metals that had been manipulated in the past, such as copper or tin, historians believe that iron technology spread from Asia to Sub-Saharan Africa through Egypt around 670 BCE. According to Shillington, “iron is chemically infused within its ore and its extraction involves a chemical process rather than simply, melting it from the rock” (Shillington, 2012, p. 44). However, recent research shows that iron technology in Africa, particularly in present-day Mali, emerged independently from its counterpart in Western Asia. African land was rich with iron ore, which was crucial for the development of iron technology and manufacturing. Iron soon became essential to everyday life for all members of the community. Hunters used it to make stronger and sharper weapons. Farmers used it to create tools such as hoes, shovels, and axes. Finally, women and children were able to utilize iron objects around the home and in the cooking process (Shillington, 2012, p. 44). This complex process and demand for iron objects ensured the livelihood of blacksmiths and their privileged position in early African society.

African iron technology was distinctly different from the Western Asian. Africans placed crushed ore and charcoal in a furnace that was either dug in a trench below the ground or in a circular clay construction. Once placed in the furnace a flux, such as lime might be added to aid the smelting process. They lit the furnace shortly after this and great quantities of air were pumped into the furnace using bellows. This air helped to raise the temperatures within the furnaces and also assisted with the chemical process. After many hours of smelting the furnace was broken open and red-hot iron was raked out of the bottom where it was then laid out and roughly hit to knock out any impurities (Shillington, 2012, pp. 44-45).

Iron as a metal rusts very easily. Consequently, few objects made during the early stages of iron manufacturing in Africa have survived to us. In fact, the clay casts have survived much better than the objects themselves. The Dogon staff available at the university’s museum was not created at this time, when the technology was just beginning, but it provides a unique sample of this earlier industry. The staff would have been carved from the trunk of a tree before it was then sat down on a flat surface and the liquid-hot iron that had its impurities already removed was reheated and poured into this wooden mold twice and the sides placed together to form this three dimensional ritual staff that reflects the values and trust held between blacksmiths of the time. Regardless of its purpose, the materials and techniques that can be seen in the production of this staff are extremely telling and represent the rise of the blacksmith and the birth of an Iron Age in Africa.