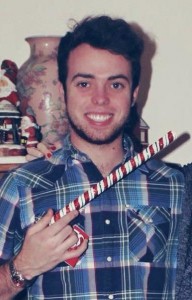 Peter Francis Myers is currently a junior, studying Secondary Math Education and is proud to call Kirkwood, Missouri his home. His paper was originally an assignment for the class LTC 4560: Reading & Writing in the Content Areas, and what started as a stream of consciousness set to the music of “Vance Joy” was later fine-tuned to the following essay. The nature of the assignment was to detail a personal history of one’s relationship with literature. At the suggestion of his professor, Peter submitted his work to “Artifacts.” Peter is a fan of the creative arts, as well as both finding and eating food, and in his spare time he enjoys assisting vagrant Hippogriffs, collaborating with his cousins Stephen Hawking and Brad Pitt, and lying to “internet people” about his actual hobbies.

I really wish reading was still a thing.

I mean, I guess it is, for some people. I’m not saying reading is dead, cause it’s not. But it’s just like everything in life once you get older; it’s different.

When I was a kid, reading was one of my favorite things to do. Like anyone my age, I picked up the occasional video game controller or baseball bat, I watched T.V. and movies and listened to lots and lots of music. But I still remember walking into my next-door neighbor’s room to see the shelves lined with practically everything except novels. My mind was blown; what do you mean, you don’t like to read?

My parents told me that when I was young, I memorized “Where the Wild Things Are.” Apparently, they had read it to me so many times, I would pick it up, and recite it while flipping the appropriate pages. Whether this was when I “learned” to read is up for debate, but I can’t help but feel it holds some sort of symbolism for my love of literature that would develop within the coming years.

I’ve always thought of myself as a bit of a creative type (I say that now, studying to become a math teacher, a profession centered around rules and structure and right or wrong answers…), and I attribute my love of reading to that side of me. When I started reading, I wasn’t watching a story unfolding on a screen. I was creating the images and people in a world within my own mind. As I saw the words unfurl in front of me, I just as equally saw the characters and stories come to life. The creation process became a drug to me; at seven years old, I was an addict. And, like millions in my generation can attribute, my biggest hit came in the form of a boy wizard and his two best friends.

“Harry Potter” could be a sub-heading on the Wikipedia page that is my life. It defined a huge portion of my childhood, and will always remain the reason I love to read. I owe JK Rowling so much, but she probably doesn’t need a whole lot else from me, seeing as the cash that went towards all the books, movies, video games, costumes, legos, and other assorted “Potter Paraphernalia” I spent my childhood collecting would likely suffice. There’s a good chance I payed for her first kid’s college tuition.

I’ll never forget finishing the seventh book, and feeling as if a chapter in my own life was finally complete. Even thinking about it now is emotional; these characters and their adventures had become my own, and now they were complete. Like any sane person, I’ve reread the crap out of them, and will continue to for the rest of my life (the day I sit my kids down and open up “Sorcerer’s Stone”… I mean who doesn’t dream of that day?). I’ve also kept up with all of Rowling’s further writing, such as her adult novels including the “Cormoran Strike” series and another personal favorite, “The Casual Vacancy.” But like all great things, Potter couldn’t last forever, and so as a youth I turned towards another series, consisting of thirteen books and new characters I could fall in love with as much as Harry, Ron, and Hermione.

If “Harry Potter” stands as the benchmark, the origin, and the unreachable king of my favorite pastime, Lemony Snicket’s “A Series of Unfortunate Events” falls into the category of that king’s sinister, twisted cousin. It’s a series that I had almost (ALMOST) a same affinity for as “Potter,” and have grown in appreciation for as I’ve gotten older- Snicket has littered his novels with references and jokes that only a more experienced reader can catch. But while I may have a strong fondness for Snicket’s ability to mesh a children’s story with adult humor, it’s not the reason the stories have stayed with me. Anyone who’s reading Snicket’s thirteen piece saga can attribute that, ultimately, what makes it so unique is it’s weirdness. This is a series set in some gothic, pre-punk, post-industrial Britain look alike where three orphans continually get shuffled around to various homes because a villainous Count can’t help but kill everyone they meet in an attempt to steal their fortune. And on the inside cover is printed “Ages 10 and Up.”

I can’t help but smirk a bit at how I think Snicket’s books were actually an elaborate series crafted around my own inner sense of the dark, the distorted, and the macabre. In truth, while “Potter” may represent my love for reading, “Snicket” does a better job of depicting exactly what it is I enjoy reading about. These were two series’ that I grew up on, read side by side, and finished at roughly the same time. But as I got older, and I expanded my reading horizons, I kept coming back to Snicket because he gave me something that not many teen authors could offer: something different. As a ten year old who would read anything suggested to him, I was constantly shoving my nose into pages riddled with triumph, lessons, and happy endings. The same can’t be said about Snicket’s work. The stories are sad. The bad guys win a majority of the time. And characters you love are murdered in every novel.

Granted, they’re fun as hell to read. The novels are at times hilariously self-aware, and always incredibly well written. I have very fond memories of bursting into laughter by myself as I flew thru the adventures of Violet, Klaus, and Sunny. It was those moments when I recognized just what I loved so much about Snicket: his ability to mix laugh out loud humor with a deeply unsettling story. “A Series of Unfortunate Events” let me explore a place in my mind of unadulterated darkness. As a twenty-one year old, I can’t think of the last time I read a book for fun that wasn’t about murder, mystery, or horror of any kind. From a young age I recognized the power of escape; not only could it take you to a place you never thought possible, it could take you to hell and let you walk around for a while. Chuck Palahnuik, author of the book (later turned movie) “Fight Club” has provided me with many horror stories which double as introspective tales and societal critiques. I’ve read all three major novels from Gillian Flynn (who most recently penned the incredibly successful “Gone Girl”), and have had the chance to step inside the minds of psychopaths and killers. And most recently, I’ve been enjoying the works of Joe Hill, son of Stephen King, who works in the realm of the surreal and the terrifying. So, thanks for that, Lemony Snicket.

I really wish reading was still a thing.

Because it’s not as big a factor in my life anymore. My favorite pastime has been replaced with the immediate gratification and much less mindful activities of television and movies. I don’t want to bash those mediums; they’re great in their own right, but I don’t really have to think when I turn on the T.V. And ultimately, doesn’t that just come down to my brain wanting a lazier activity as it gets older, and loses it’s sense of total wonderment at literally anything and everything? If I can get through a story in two hours, why spend two weeks reading through one?

And I don’t think I’m the only person who feels like this. Hardly any of my friends read for fun anymore, and I can’t blame them. Everyone’s always busy or tired or just needs a break, and there’s no denying that reading is work. When I tell a friend I’m picking up a new book, they’re surprised, and I don’t think it’s because they find my decision to read for fun astonishing, but rather they’re looking at themselves and wondering when something they used to do became so obsolete. I don’t really have people to talk with about the books I read, which has only caused a greater drop off in my reading as I’ve gotten older. Picking up a book now is a personal luxury for me, when it used to be closer to a consistent hobby.

Granted, my last year has gotten better. I went through a period with little to no reading for a long time, but I’m working on getting back to where I was as a kid. Nowadays, I often find myself picking up a book because I need to read it before the movie comes out, or because it’s the next in a series I’ve been with for a while. But no matter what, I always end up enjoying myself. I don’t ever want to give up that sense of wonder and ecstasy that comes with seeing a story in your head. In fact, a goal in my life is to one day publish a book myself, a creation wholly my own to share with the world. But before I get to that, I need to learn from the greats. I need to spend some time hanging out with my nine year-old self. I need to dive back into the memories I shared with Bilbo and Voldemort, and create new ones as well.

I need to keep reading.