Christine Carson is a senior in Environmental Science with an emphasis in Soil Resource Management at the University of Missouri. Upon graduation in May of 2015, she plans to attend Kansas State University, where she will study soil microbiology in restored prairies. Motivation for her academic interests and this article stem from Christine’s vested interests in sustainable agriculture and environmental outreach.

Imagine your family dinner table. It is a gathering to enjoy food and good tidings. The table is full with all of your favorites, including the green bean casserole, fresh dinner rolls and fried…crickets? You may be thinking, “Yuck! Not at my table!” But for a world facing a population of nine billion by 2050, insects at the dinner table may become a reality if humans are to sustain this projected growth.

Before proclaiming this practice as disgusting and out of the question, one must understand and consider the numerous environmental, health and cultural purposes of edible insects. The practice of eating these six-legged creatures known as insects is called entomophagy, which is derived from the word “ento-”, meaning insect, and “-phagy,” meaning to eat. Insects are already used as food to sustain millions of people around the world, and have been for centuries. They are sustainable, efficient, and (believe it or not) incredibly tasty.

Food for the 21st Century

Human population is skyrocketing by 75 million people, annually. With this large amount of growth, the big question on everyone’s mind is how to feed these newcomers. Under the current food system, supporting this baby boom would require humans to double the production of livestock for beef, chicken and pork consumption. Because livestock is the second largest contributor to the most serious environmental concerns and augments 18% of greenhouse gas emissions, this type of growth would be unsustainable and ecologically detrimental.

Thirty percent of ice-free land is used for raising large livestock, such as cows, pigs and chickens. This land is a frequent source for major water pollution from waste run-off into streams. The soil in these areas is severely degraded from overgrazing, erosion and compaction. As the animal feeds, it produces methane gases and ammonia waste that contributes to greenhouse gas emissions. Additionally, rearing livestock significantly increases deforestation and loss of biodiversity as these large mammals are moved into new areas. In summary, livestock rearing is extremely inefficient due to the amount of space and resources it requires.

While livestock requires a hefty amount of space and resources, insect rearing does not. Insects can be raised in a small amount of space, such as in a greenhouse. Approximately 500 crickets can fit in a 14 gallon space. Insects require about 4% of the water and 1/10th of the amount of grain that a cow would require to produce the same amount of food biomass. They grow and reproduce quickly, ensuring a constant supply of food. On average, a cow produces four calves throughout its lifespan, while a female cricket can lay 1500 eggs.

While it may seem abnormal to farm insects for food, countries, such as Thailand, are already utilizing their ento-resources to help feed the masses. As the population hits the ceiling, the western world may want to use countries such as Thailand as a model for the future of their food system.

Entomophagy around the World

When most people think of eating insects, they may think of the unpleasant realization that one of those repulsive, pesky buggers has somehow accidentally flown into their mouth during a run or a bike ride. However, for many regions of the world, edible insects take on an entirely different meaning.

Humans have been eating eggs, larvae, pupae and adult species of insects for thousands of years. For countries such as Thailand, Vietnam, Cambodia, China, Africa, Mexico, Columbia and New Guinea, insects are a dietary staple, even a delicacy, for many citizens. In fact, 80% of countries around the world regularly consume insects as food. Not only have the citizens of these countries found entomophagy to be a suitable solution for providing food for the people, but they relish the taste, texture and nutritional value that insects provide.

Many nations regularly enjoy insects for dinner, while the western world turns up their noses at the thought of edible insects. Why have westerners rejected this simple food source? While this question is difficult to answer, I propose that this can change. Western societies, must rethink the way that they view insects. If the environmental benefits and abundant examples from around the world are not convincing, one should consider the health benefits packed into these crunchy critters.

Entomophagy for your Health

The most common insects eaten around the world are various species of cicadas, ants, termites, mealworms and crickets. Each of these specimens pack a powerful nutritional punch that should not be ignored.

Insects are commonly regarded for their high protein, low fat nutritional profile. They are a great, low calorie, high protein food for those looking to shed a few extra pounds. When compared to beef, crickets had about half the calories and one-third the amount of fat for the same weight of meat.

In addition to being a healthy, low calorie protein source, insects also have other health benefits. They contain eight essential amino acids, vitamin B12, riboflavin, the biologically active form of vitamin A, and several minerals. Insects can be beneficial for heart health, as well. Crickets contain 45 times the amount of omega 3 than the same portion size of beef. Mealworms contain a whopping 85 times more omega 3 when compared to beef. Combined with the environmental impact of raising beef, choosing insects for food should be a no-brainer.

While some readers may be convinced that insects are a healthy, environmentally friendly food source, there’s always the hindrance that comes from being unsure as to how to prepare a dish featuring an unfamiliar ingredient.

Preparing insects is easy and requires little skill in the kitchen to create simple and tasty ento-creations. Many insects such as crickets, ants and termites are delicious dry-roasted. This can be done by seasoning the insect with sweet or savory flavors and putting them into the oven for 60 minutes at 200oF. For more detailed insect creations, there are several books and websites that host insect friendly recipes. 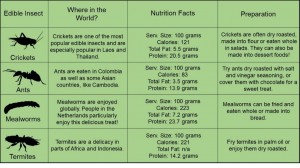 Other insect dishes can be created by purchasing insect flour from ento-friendly companies, such as World Ento. The flour can be used to create anything from breads to gravy. The flour is high in protein and is a great addition to any meal.

World Ento creates their products from farmed crickets and sell their flour online. The company based out of Texas that promotes sustainable food production by putting insect products on the market. The company CEO, Emily Greenthorn, explained that promoting insects as a healthy, sustainable, organic food is the overall mission of the business. She also informed us that while their products are not currently found at your average grocery store, their goal is to eliminate the western cultural-taboo that surrounds insects as food in order to spread entomophagy to the general public.

As with any food, there are always some precautions to be aware of before consuming something new. The most common issue surrounding insects as food is the possibility of contamination in the food. However, this is no more a concern with insects than with consumption of livestock. As with any food, it is important to trust the source that it is coming from and ensuring they are raising the animal in sanitary conditions.

Insects are commonly fed oatmeal before they are fed to humans to clean their intestinal tract. Therefore, insects that are farmed and fed a reliable food source are typically safer than foraged insects. When eating insects, it is important to remain safe in order to reap the full benefits of these edible arthropods.

Sustainable, Tasty and Healthy…Why not?

While it may not be feasible to make a complete switch to entomophagy in your household, hopefully some of the taboo surrounding insects has been removed after learning more about the numerous environmental, health and cultural benefits to entomophagy. Edible insects are essential to promoting a sustainable food source for future generations, and they taste great, too!

For more information on how to incorporate insects into your family’s diet, check out these other ento-friendly books and websites:

www.worldento.com – Provides insect food products and recipes for those willing to give entomophagy a try.

The Insect Cookbook by Arnold van Huis, Henk van Gurp and Marcel Dicke. This detailed book provides reciepies and more information on the benefits of entomophagy.

Edible insects: future prospects for food and feed security by Arnold van Huis. This presentation was assembled for the Food and Agricultural Organization of the United Nations. It provides information on how entomophagy can be expected to become a portion of our diets in the future. The entire presentation can be found online.