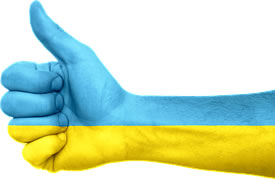 Jakob is an undergraduate student at the University of Missouri Columbia double majoring in Computer Science and Music. He was the secretary of the Eta Upsilon chapter of Kappa Kappa Psi, and a mellophone player in Marching Mizzou, the Big M of the Midwest. In his spare time, he’s a performer, snowboarder, and software engineer. He’s passionate about teaching leadership skills to youth. He believes that “leadership skills, developed at a young age, can only get better with time. Giving youth leadership positions will instill a since of confidence in their abilities that will last their whole life through.” His topic selection was based on a personal interest in Ukrainian crisis. Unfolding his freshman year in college, he was kept up-to-date on the topic by reading papers.

It is said in poker that you can win on a weak hand if your opponent is showing theirs. Although, statistics has shown us that there still is a possibility to win. The perfect flop could win it all or loose it all. In Ukraine, there is little hope for a perfect flop, especially, when your opponent’s hand keeps changing. Although denying any official involvement in the 2014 Pro-Russian revolution in Ukraine, The Russian government has used its political, social, and economic powers to amplify the Ukrainian economic crisis, with the purpose of gaining strategic military assets.

Unrest in Eastern Europe is not uncommon to history, especially after World War II. However, for Ukraine, things took a turn for the worst in November 2013 when, according to Encyclopedia Britannica, “[A] planned association agreement with the EU was scuttled just days before it was scheduled to be signed” (Makuch, 2015). Stalled by the Ukrainian government in an effort to preserve jobs and calm social tensions, this plan backfired, sparking what history has called The Maidan Protest Movement. By February 2014, the world began to notice the extraordinary amount of structural violence being used by the government to disperse protesters gathering in Kiev’s Maidan Nezalezhnosti (“Independence Square”)’ and took steps to help the suffering. In an effort to reduce the power of the Ukrainian president several countries, including France, Germany, and Poland, engaged in peaceful talks. Russia joining these peaceful talks and, “[Introduced] a further element of uncertainty by   declining to sign the accord, which reduces the power of Mr. Yanukovych, and ally of Moscow” (Higgins & Kramer, 2014).

This also produced fears that Moscow might try undoing the proposed trade deals and, dims hopeful thoughts for the upcoming December elections, adding more social anger toward President Yanukovych. Relations between the President Yanukovych and the protestors in Kiev continued to degrade, so did relations between people of east and west Ukraine. Increasing economic ties with Russia, and failure to move toward association with the European Union opened massive fissures within the Ukrainian people. While protestors in Kiev called for the president to leave his office, and greater ties with the European Union, protestors in Eastern Ukraine called for greater ties with Russia and even desired to leave the Ukrainian government behind entirely. Tensions in Eastern Ukraine continued to build until April 2014, when Pro-Russian protesters in masks and balaclacas, chanting, “Donetsk is a Russian city!” seized the main administration building of Konetsk and raised the Russian flag above it (Varshalomidze, 2014) Finally, igniting massive civil violence between Pro-Russian separatists and the Ukrainian government at Kiev.

Although the Ukrainian government at Kiev may be receiving the majority of the blame for this conflict, there are connections that trace Russian involvement economically all the way back when Ukraine first declared its independence from the USSR. Again in 2004, with the Orange Revolution, the people of Ukraine have showed interest in joining the European Union. Since the end of the Cold War and Ukrainian independence from Russia, the Ukrainian economy has been stagnant and dependent on Russia for large portion of its exports.

The before mentioned association agreement between the EU and Ukraine would increase trade between Ukraine and the rest of Europe, and allow for visa movement of Ukrainian citizens into the US. Since 2004, talks with the EU have steadily increased hope for the Ukrainian economy, only to have them slashed in 2014. The Ukrainian government favoring economic deals with Russia over the first steps to Ukraine joining the European Union. President Yanukovych leaving office by the demands of protestors only made things worse as the flow of economic aid was terminated by Russia. Reich said, “The first painful adjustment will be to a lower standard of living-or at least far lower than [Ukraine] anticipated” (p. 89). And now Ukrainians feel the pain economically. Russia has used this economic pain to polarize the social problems of the country. Utilizing policies of Russian nationalism to further expand social fissures between eastern and western Ukraine. This nationalism is derived from John Winthrop’s, “a city upon a hill” (Bacevish, p. 122), and is attempting to pull Eastern Ukraine away from the European Union and Toward Russia by offering a potentially better economic future.

However, behind the scenes one might notice how Russia has become a political ventriloquist in Ukraine ever since the Orange Revolution. Father Charles Coughlin called many bankers and financiers controlling Wall Street, “ventriloquists of Wall Street,” (Reich p. 121) for they seemed to know the inside workings of Wall Street and how to manipulate them for their own needs. Russia has done that very same thing with the Ukrainian government. The shroud of secrecy surrounding the failed association agreement with the European Union and President Yanukoyvch’s decision to accept aid from Russia makes the specifics of behind the scenes, “ventriloquism,” extremely difficult to accurately understand. The outcome of this, “ventriloquism,” has been Russia gaining a strategic military port in Crimea, even by illegitimate means.

This, “ventriloquism,” has also obscured what Russia’s true intentions are in this conflict. The public interests in Ukraine have been conveyed through protests in many major cities, but in areas close to the Russian border of Ukraine public interest is not as clear. It would seem as if Russia is playing the long game, complicating security in the entire region. With out knowing Russia’s full intentions, and end game for Eastern Europe, panic will continue to spread across Eastern Europe. Similar to how a magician never tells his tricks, Russia may never fully publicize its full intentions for Ukraine and Eastern Europe. Peace talks repeatedly show that Mr. Putin is militarily in control in the region, and neither the United Nations nor the European Union are willing to use military power. The New York Times said, “[T]hat Mr. Putin retains the upper hand precisely because he is prepared to use military force to get what he wants in diplomacy.” (Higgins, 2015). For now the world can only wait and see what Mr. Putin has in store and react accordingly.