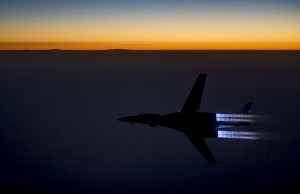 Grant is a junior Accounting major from Columbia, MO. He chose to write about the evolving conflict with the Islamic State due to an enduring interest in Islamic culture and world affairs. He would like to give her special thanks to Dr. Jamil Al Wekhian for helping him write this paper.

On September 10, 2014, President Obama addressed the nation, in his speech he issued a national vendetta against the terrorist group known as the Islamic State of Iraq and Levant. The president proposed a plan to conduct a campaign of coordinated airstrikes to “degrade and ultimately destroy ISIL”; assuring the United States would not deploy any ground troops. More recently, on February 11, 2015, Obama formally requested Congress to authorize the use of Military Force to combat the Islamic State, which would procure the possibility of U.S. ground forces entering the conflict. In his appeal to congress, the Obama administration outlined the impending threats posed by ISIL, exhibiting a necessity for the U.S. to intervene on a larger scale, “Whereas the terrorist organization that has referred to itself as the Islamic State of Iraq and the Levant and various other names (in this resolution referred to as ‘‘ISIL’’) poses a grave threat to the people and territorial integrity of Iraq and Syria, regional stability, and the national security interests of the United States and its allies and partners”(Egan, 2015).

The United States has called upon its allies to take part in a U.S. led coalition to combat the terrorist group ISIL. The State Department lists 60 countries as members of the “Coalition to Degrade and Defeat ISIL.” Many of the countries participating have been involved since 2012 in response to the evolving conflict in Syria” (Katzman, et al., 2015). The United States’ military policy in the Middle East has created optimal conditions for the radicalization of Muslims in the region, strengthening the extremist militias and validating the doctrines of Islamic radicals sworn to combating the U.S. government. Despondent circumstances, persisted by the U.S. military in the Middle East, reinforced the Islamic States’ influence in the Middle East.

The Islamic State has seized large portions of Iraq and Syria, declaring a new Islamic Caliphate, naming Abu Bakr al-Bagdadi as the Caliph. ISIL has committed atrocious acts of violence during their rapid ascent to power and have repeatedly issued threats against the United States. “ISIL has threatened genocide and committed vicious acts of violence against religious and ethnic minority groups, including Iraqi Christian, Yezidi, and Turkmen populations” (Egan, 2015). The United States’ military commitments in the Middle East have amplified feelings of rage and resentment among the populations it is claiming to liberate. These increasingly negative sentiments have given a degree of validity to the creeds of radicalized Islamic militants committed to fighting the United States, effectively adding to our enemy’s ranks.

By meeting ISIL’s calls for battle, the U.S. continues to fall for the fallacy that extremism can be bombed to extinction. The United States’ military involvement in the Middle East and its ongoing war on terrorism has continually oppressed Islamic populations in the region by exposing them to excessive instances of overt violence. “Until policymakers examine the causes of ISIS’ appeal, and begin dealing with them, destroying ISIS will only give rise to an equally extreme group in its place. Military power alone seldom succeeds in defeating an adversary that is willing to die to achieve its goal” (Marshall, 2014). The Islamic State has certainly contested the U.S. government.  However, meeting their threats with a military response will only increase ISIL’s influence and power in the Middle East.

Soldiers participating in the U.S. military campaign in Iraq and Afghanistan faced a serious challenge; their enemy was concealed within the general population, held no definite territory, and did not display a distinct uniform. The only method of distinguishing combatants from civilians was whether or not the person in question was carrying a weapon. These conditions increase the possibility for error and expand collateral damage. As military technology has improved, there has been “an increase in human, environmental, and economic costs of war, a decrease in the casualty rating of combatants, and an increase in the number of civilian casualties” (Barash and Webel, 2002). The extensive use of U.S. weapons in heavily populated areas decimated Iraq’s infrastructure and killed intolerable quantities of civilians, breeding anti-American sentiments within the region.

A statistical analysis of Iraqi civilian casualties conducted in the summer of 2006 and published in the Lancet Journal found, “that as of July, 2006, there have been an estimated 654,965 excess Iraqi deaths as a consequence of the war, which corresponds to 2.5 percent of the population in the study area. Of post-invasion deaths, an estimated 601,027 were due to violence, the most common cause being gunfire” (Burnham, Gilbert, Lafta, Doocy, & Roberts, 2006). The analysis excluded samples taken from Fallujah as outliers that would unreasonably skew national data.

Alienation of the Iraqi public by the dreadfully powerful U.S. military produced a prevalent crisis throughout Iraq. The violence, destruction, and humiliation experienced by the Iraqi people perverted their perception of American benevolence causing them to view the U.S. military as invaders and occupiers rather than liberators. During times of desperation and crisis people desperately seek solutions to their troubles.  For some Iraqis the only appropriate response was to join the growing insurgency in Iraq to expel the U.S. invaders. “Intuitively it often seems that periods of large-scale societal instability and uncertainty coincide with sociopolitical and ideological extremism” (Hogg, Kruglanski, & Den Bos, 2013). The desperation and violence in Iraq, perpetuated by U.S. military operations in the region, attributed to ripe conditions for insurgency recruitment.

The Islamic State traces its origins to Jamaat al-Tawhid wal-Jihad (JTJ), a Sunni Islamic militant group founded by Abu Musab al-Zarqawi (AMZ). JTJ’s dedication to U.S. insurgency efforts in Iraq in the early 2000’s bolstered their recognition amongst jihadists. In 2004, JTJ unified with al-Qaeda, and AMZ’s militants acquired the new title al-Qaeda in Iraq (AQI). A strategic decision for AMZ, “al-Qaeda in Iraq provided al-Qaeda with a ready-made base from which to strike the United States and AMZ with prestige. He was now part of a brand name that drew recruits and financial and logistical support” (Hashim, 2002). Soon after AMZ pledged his allegiance to al-Qaeda there was a growing concern among al-Qaeda leadership over AMZ’s tactics and attitudes toward the Iraqi Shia population. AMZ regarded Shia Muslims with a profound loathing, frequently targeting Iraqi Shia populations using suicide bombers, “AMZ’s tactic of engaging in mass civilian casualties, earning him the sobriquet “sheikh of the slaughterers,” aroused grave concern” (Hashim, 2002).

In June 2006, U.S. intelligence tracked AMZ to a farmhouse north of Bagdad; the U.S. military dropped two, five hundred pound bombs on their target. The U.S. was quick to declare an apparent victory. However, AMZ left behind a potent legacy and over 12,000 Islamic extremist fighters.  “Soon afterward, the organization announced the establishment of the Islamic State of Iraq (ISI) under the leadership of Abu Omar al-Baghdadi” (Hashim, 2002). The first Islamic State project was a disappointment, their crusade failed to garner support from Sunni populations and other insurgent groups. Many radicals believed ISI’s goals deviated from the prevailing obligation of expelling the U.S. occupation. In addition, ISIL did not have the supplies or authority to rule over their acquired territory.

By the end of 2008, the ISI threat was supposedly extinguished, it seemed Iraq was returning to a state of normalcy. In the following years U.S. troops began to withdraw from Iraq leaving behind a failing democracy, wavering security forces, and increasing sectarian violence. The systematic destruction of ISI’s leadership in 2010 permitted the Islamic State’s most successful leader Abu Bakr al-Bagdadi, to assume control of the organization.

Abu Bakr al-Bagdadi was able to construct a sizeable and militarily effective organization capable of administering an area roughly the size of the United Kingdom. He undertook vast reforms, constructing a more, “cohesive, disciplined and flexible organization” (Hashim, 2002). The Islamic State has taken advantage of political and social instability in the Middle East to advance their expansion. The Syrian civil war and Iraqi sectarian violence, combined with political and military volatility in the region, endangered legitimate government’s footholds on their territory.

The Islamic State has effectively established governmental institutions in their occupied territory, thereby strengthening their foothold in the region and generating funds to continue their crusade. ISIL has established Sharia Law in their subjugated territory, implementing courts and law enforcement to administer their new edicts. The courts and laws established under ISIL are largely considered a brutal fundamentalists interpretation of crime and punishment. In addition to Islamic courts, ISIL has established educational institutions in accordance with their harsh interpretation of Islamic values. Many young men in the occupied territory attend military training, while the women attend separate schools designed to naturalize them into lives as devote Muslim women. The Islamic State collects taxes and zakat, or charity, from civilians under their control and is capable of producing approximately thirty thousand barrels of oil each day. The oil they produce is sold on the black market at a highly discounted rate, still providing the terrorist group with a significant amount of funds.

The White House has taken a multilateral approach to combating ISIL. In addition to conducting airstrikes, “President Obama has authorized the deployment of approximately 3,100 U.S. military personnel to Iraq for the purpose of advising Iraqi forces, gathering intelligence on the Islamic State, and securing U.S. personnel and facilities” (Katzman, et al., 2015). Two-thirds of the military personnel in Iraq advise and train the Iraq Security forces and the Kurdish Peshmerga, both are essential for ground operations against ISIL. The United States has also sought to stem the flow of foreign fighters and funds to further degrade the Islamic States’ military and administrative capabilities. “The United States seeks to disrupt the group’s revenue streams by targeting those who refine, transport, handle, or sell IS oil” (Katzman, et al., 2015).

In addition to disrupting the Islamic States’ oil revenues, the United States seeks to disrupt funds flowing through financial institutions, “the United States aims to restrict the Islamic State’s access to the international financial system and to limit its ability to move, store, and use funds it acquires locally” (Katzman, et al., 2015). Reducing ISIL’s flow of funds and troops is essential for the success of the U.S. led coalition. If carried out successfully, these initiatives will cripple ISIL’s ability to operate.

To maintain a state of peace in the Middle East, the United States must reform its foreign and military policies, emphasizing humanitarian aid and diplomacy rather than military action. If the United States is to win the hearts and minds of the world, it must do so with humanitarian fulfillments, not acts of violence. “Surely, the surprises, disappointments, and woeful even shameful failures of the Iraq War make clear the need to rethink the fundamentals of U.S. military policy” (Bacevich, 2013).

The amount of money spent combating enemies that seemingly pose no direct threat to national security could be better utilized at home and abroad. Humanitarian aid distributed by the U.S. throughout the Middle East, instead of bombs and bullets, would remove the legitimacy of the claims made by radicalized Islamic militant groups fighting the United States. The approach would weaken the Islamic States’ ability to recruit additional fighters and intensify the prospect of the general population rejecting the terrorist groups reign.