Imagine a woman giving birth. What exactly comes to mind? For many Americans scenes of a screaming woman laying flat on a hospital bed in an all white room probably flashes before them. For others around the globe, the picture is somewhat different. Women in many other developed countries most often birth using a practice called midwifery—delivering naturally with a trained nurse midwife in the home of the mother or in a birthing center. This is a practice that has been around longer than hospitals themselves, and focuses on placing the power of birth into the mother’s hands rather than taking that power away from her. Like many other aspects of culture, the way we give birth in the United States is much different from how women traditionally gave birth, and from how much of the world still typically gives birth. In our nation, there is a sort of fear instilled in women and girls from a young age that birth is a sterile, painful, and seemingly unnatural process that a woman cannot do alone. Our medical professionals train us that birth is something to fear; in my opinion, there is actually nothing more frightening about birth than that belief alone. However, there must be reasons why we have come to this fearful consensus as a culture. Although many things including a lack of information about birth contribute to birthing fear, I believe that American women are mostly afraid of birthing because of false information given to them by doctors who wish to scare mothers into a hospital birth.

According to famed and successful midwife Ina May Gaskin, fear in U.S. birthing culture is perpetuated largely in part of the lack of birthing education and images in this country. In her 2013 TEDx talk, she describes figures and pictures depicting a woman and her open womb being widespread in Peruvian culture. 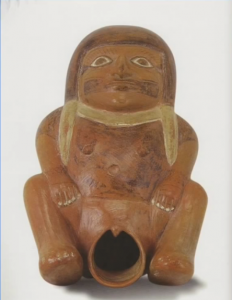 She explains that images like the one shown are very important in normalizing birth in the minds of women and girls, and that if we spread similar images in our culture women would be significantly less fearful of their bodies and their natural processes. Because the woman this sculpture depicts is seen as open and seated in a natural position without an expression of fear on her face, it normalizes the opening of the body during childbirth—she shows women that they can open their bodies willingly without pain and fear. The lack of openness about birth and our bodies in U.S. culture contributes greatly to birthing fear, which itself contributes to fewer babies being born naturally and/or under the watchful eye of a nurse midwife.

In the 2008 documentary The Business of Being Born, director Abby Epstein reveals that in the early twentieth century nearly 95% of all babies born in the United States were born at home and in the presence of a midwife. Today a midwife attends less than 1% of

births, and nearly one-third of all births are by cesarean section. According to the film, the reason for this sharp and sudden decline in natural birthing methods is largely because of the smear campaign against midwives perpetrated by doctors and hospital directors at the beginning of the 1900s. 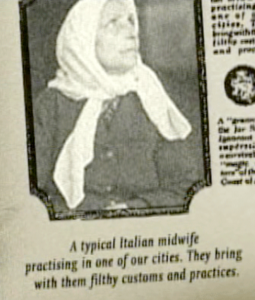 Image source: “In the Way of Our Grandmothers: A Cultural View of Twentieth-Century Midwifery in Florida”

Medical professionals spread images like the one shown, and caused many mothers to change their minds about midwives and birthing in general. Doctors’ actions contributed to fear of birth in our culture because it instilled a feeling in women that they were incapable of giving birth without their help. Many young mothers in the early 1900s were born at home with a midwife, themselves. After doctors went on a smear campaign against midwifes, these mothers who were born at home themselves became frightened of the “filthy customs and practices” by which they had been born. As a result, they turned to medical professionals for their prenatal care and for their birthing options. According to one source, histories point to this shift in consciousness:  “They explain how childbirth is seen less as natural and more of an “irregular” situation that must be administered medically. This includes “invasive forms of treatment” such as pitocin or anesthesia. As hospitals became more popular, women who could afford medical care decided to chose doctors over delivering at home with a midwife. During the time when hospitals were becoming more popular, sanitation was not the greatest and doctors did not know anything about childbirth. As time passed, new medical technologies were invented and women were strapped down to the bed while given drugs and episiotomies, which is an incisions from the vagina to the anus to prevent tearing during child birth.”

False information such as that given in the smear campaign against midwives is a prime example of doctors perpetuating fear of birth in our culture, and such information has caused a great decline in the amount of midwives used in this country.

Along with this falsification of information by doctors comes a lack of information as well. I cannot think about the last time birth or options women have to give birth was part of mainstream media or prevalent whatsoever in our culture. Most women in the United States are completely unaware that they have the choice to give birth on their body’s terms with a nurse midwife in their own homes. This is a problem that our birthing culture has perpetuated—in the United Kingdom (U.K.), a nation with an infant mortality rate that is significantly lower than the United States’, birthing at home with a midwife is actually urged by the health directors. Not only do professionals give the women in their country options and proper education regarding different birthing practices, but these practices are also made widely available to expectant

As a result of their educated birthing culture, a Congressional Research Service report prepared for congress in 2014 estimates that 4.4 infant deaths per every 1,000 live births occur in their country. In the United States about 6.2 deaths per every 1,000 live births occur, and there are fifty-five developed nations including the U.K. that have lower infant mortality rates than we do. A more widespread education about midwives and other natural birth options like those in many European nations would help dispel fear in our birthing culture because of their strong likelihood of a lower risk of infant mortality.

Despite this knowledge of midwifery and homebirth being correlated with a lower infant mortality rate, almost every baby born in the U.S. is still born in a hospital setting. Since I was a young girl I remember watching channels like TLC where they would follow a woman through her pregnancy and film most of her birth in order to piece together shows like A Baby Story. Isn’t that nice—A Baby Story? The only problem is, the story did not usually come to its happy ending on such a great path. During the actual births, every mother was in a hospital bed and lying flat on her back to deliver. From a young age images of women in screaming pain while hooked up to IVs and other pain medications and monitors were all I had of what birth meant. Until adolescence, I was unaware that different ways to give birth even existed. Imagine if this were the image a woman had about birth when she first discovered her pregnancy—how would this thought give her anything to look forward to about her birthing experience? I believe that it would not, and that the ideas we have about birth that come from hospitals and screaming mothers definitely instill a fear in us about giving birth. It was only after I discovered natural homebirth and watched mothers swaying their hips as their baby’s head was crowning that I had a positive image of birth. Fewer ideas about birth being done in a hospital and more about birth being a beautiful experience would definitely help dispel fear of birth in our culture.

All in all, each reason why we have fear in our birthing culture has lead to the others. A doctor giving false information to mothers causes them to have less chance to discover alternatives to hospital birth, in turn giving only a scary picture of birth in general. All of these things add upon one another and contribute entirely to our fear of labor and birth as a culture. I know that positive information and optimism about birth from doctors, a more widespread education about midwifery and other natural birthing practices, and dispelling the frightening images of a woman screaming while giving birth in a hospital would all put birthing confidence back into the hands of expecting American mothers. With this confidence women will be able to birth the way they should—exactly how they want to.

Susie, Debra Anne. “In the Way of Our Grandmothers: A Cultural View of Twentieth-Century

Midwifery in Florida” Paperback – February 1, 2009.” In the Way of Our Grandmothers: