I grew up wanting a dog. In fact, since I learned to talk up until the age of 7 all I talked about were dogs. It didn’t help that my neighbor had a real-life Air Bud Golden Retriever who would fetch the newspaper every morning, which was a constant motivator to keep persuading my parents for a puppy. I remember during “reading time” in elementary school bringing my 5-pound, gigantic encyclopedia of dog breeds to read. I knew of every dog breed and their life expectancy and all the common health problems associated with that breed and found it necessary to share all this information with my classmates during what should have been “silent reading time”. I was asked to bring in a Junie B. Jones book for next time, which, now that I think about, greatly offends me. Why is it so weird for a 7-year-old girl to more interested in memorizing canine facts than reading tantalizing tales?

Anyways, after countless persuasive PowerPoint presentations I’d given to my mom about getting a puppy, she decided to strike a deal with me — I could get a cat instead because they were smaller and much less work. I pondered upon this idea and internally debated with myself in a Deal or No Deal sort of fashion, until finally accepting her offer. We shook hands and parted our ways as most parent-child business deals go. Within the week, we were proud owners of a 7-month, Turkish Angora cat named Snowball.

As a spritely, little 7-year old — having a cat was cool. In fact, it made me really cool. People I had never spoken to at school had somehow caught word of my new kitty and prompted their parents to call my parents in order to “schedule a play-date”. It seemed as though Snowball was a celebrity, with people stopping by at all hours of the day to catch a glimpse of her and hoping to maybe, just maybe, catch her on the rare hour she was awake and ready to play. Nevertheless, I had become a self-proclaimed cat-lover and was damn proud of it.

Now, I am a twenty-year old woman and it is not cool. In fact, it’s really not cool. When I asked University of Missouri senior/fellow cat owner, Jenny Herman, about what first comes to mind when she hears the phrase “crazy cat lady”, she automatically replied: “An old lady with a bathrobe and slippers, 20 or more cats, eats canned soup, and smells constantly like cat pee” (Herman). I would like to say that this is just her outdated personal definition and that most people don’t buy into this skewed stereotype — but that would be a lie. For instance, “The words associated with cat lady on Urban Dictionary, for example, include: ‘lame’, ‘forever alone’, ‘spinster’, ‘ice cream’, and ‘smelly’” (Baird). Before I go any further, I would just like to address that the adjective “smelly” has come up on both occasions and is beginning to make me slightly worried. Please, if I smell like cat urine or any sort of ungodly bodily function, let me know at the appropriate time and place. 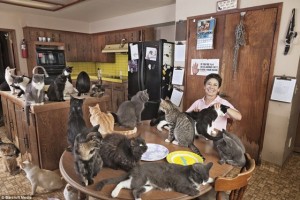 While I can understand how the “crazy cat lady” trope began, considering “…11 percent of cats live with single women but only 2 percent live with single men…” (Baird), it is still a misrepresentation. Like most stereotypes, they are incomplete and generalize a group of people in order to make it easier for society to cognitively function. Which is why photographer, BriAnne Wills, set out on a journey through New York City to capture what the modern day “cat lady” really is like, in contrast with what the public believes. For her project, titled Girls and Their Cats, she says “What I wanted to do is dispel the myth of the ‘crazy cat lady’ and continued by revealing that “All the women I photograph are strong, independent, talented, and beautiful in their own way — quite opposite of the stereotypical cat lady” (Sanchez). Oddly enough, these women are fashionably dressed (not in their bathrobe and slippers) and many have high-power careers, much unlike the old-fashioned idea of what a “cat lady” is.

Though the idea of a “crazy cat lady” can be simply seen as a stereotype, it is also imperative to recognize the double standard it creates in regards to gender. While cats have been assigned this idea of belonging to only women, “It should be pointed out that many men also love cats. Ernest Hemingway was mad about polydactyl, or six-toed cats, and kittens played with Winston Churchill’s newspaper as he read, and sat alongside him during meals” (Baird). So if men love cats as well, how come the hash tag #catlady has been used 1,495,455 on Instagram, but the hash tag #catman has only been used 75,417 times? It’s simple — cats equates to singleness, historically speaking singleness is a much bigger dilemma for women, therefore the idea of a “cat lady”, or an undesirable and hopelessly alone woman, has been created.

In fact, women even call themselves this trope as a way to deflect the negative prejudice today’s society has on women who own feline friends. “Marjorie Ingall, the author of ‘The Field Guide to North American Males,’ a humorous taxonomy published in 1997, said that the embrace of the cat-lady identity is both empowering and strategic” and states that: “I think with all things that are self-deprecating, you make the joke before someone else can,” she said. “It’s a way of saying that you know you’re vulnerable at this point in time while also saying that you’re powerful because you can joke about it. When you can joke about it, you’re in control.” (qtd. in Butnik). I admit, as a proud owner of 2 cats, have called myself a “cat lady”. This may seem hypocritical, since I am writing about the derogatory use of the phrase, but my reasoning corresponds directly with Ingall. I’ve said it to escape the judgmental looks. I’ve said it so that I laugh at myself before others do. I’ve said it to embarrass myself before others have the chance. I suppose I’ve said it for a lot of reasons — but I shouldn’t have to.

It seems unfair to me that women have to belong to a trope that shames them and advocates that they must be homely-looking creatures with no love life, while men are free to own whatever pet they desire, whether cat or dog, and have no repercussions. When I asked Jenny if she feels that men are repressed in any sort of way by having a cat, she exclaimed: “Oh definitely not, there isn’t the same kind of idea around men who own cats than there is around women” and added that “Men who adore their dogs are not nearly as stigmatized or criticized” (Herman). While I would love to give a counter argument, I cannot truthfully say I have heard of a man being asked if he’s single because he owns a dog or being presumed to be unattractive. Instead, men are praised, especially in the case of owning multiple dogs, because they are considered to be “…icons of independence, freedom, and adventure” (Baird) and are colloquially coined as a “man’s best friend”, whereas cats are more lovingly called a “women’s worst enemy”.

I always find this idealization of dogs and their carefree and independent nature to be very ironic. Let’s not forget that “Dogs need walks and near-constant attention, but cats hardly need anything at all. They sleep while you’re at work and jump on your lap while you watch Netflix: the perfect pet for the so-called millennial” (Butnik). I would like to point out that I have nothing against dogs, in fact, my family actually owns one now, but the idea that their owners are these go-with-the-flow, independent people is a myth. If you know anyone who is a dog owner, you can probably contest to the fact that dogs are a huge responsibility that can at times be a burden to the social life of the owner. Whereas with cats, you are free to live your life on your own schedule and contradicts this idea that cat owners are anti-social homebodies.

The point of this essay is not to tell you that “cat ladies” don’t exist. They do. If they didn’t, why would I even be writing this? Yes, there are old ladies, perhaps knitting and watching Wheel of Fortune with their cats as I write this, but that doesn’t mean to say all cat owners fit into this mold. The problem with stereotypes is that we view them as concrete and inflexible, with no room for outliers or differing perspectives. Or maybe people fit both molds, not necessarily one or the other.

Yes, I am constantly covered in cat hair and love showing pictures of my cat to anyone who will give me the time of day. No, I do not reek of cat pee (again, please notify me if I do) or stay in all weekend long tending to the needs of my kitty.

Yes, I do enjoy snuggling with my cat while re-watching the finale of The Office or curling up with a good book, cup of tea, and my kitty. No, my reading choices do not consist of cat breed encyclopedias (I’ve surpassed that point in my life) and Instagramming a #catpictureoftheday everyday.

The last thing I want to say to the people who have continued to read this essay till the very end is, thank you. And if you stopped reading this when you saw the title, it doesn’t really bother me because “Studies have shown that cat owners are less likely than those who have never owned a cat to die of cardiovascular disease” (Baird), so I guess karmas a bitch like that.

I don’t ask that all of you become cat-lovers and start subscribing to Cat Fancy, but in the words of Jenny Herman, women should be viewed as “…beautiful angels with awesome furry goddesses. We are awesome, and cats are awesome, if a dog is a man’s best friend, a cat is a woman’s best friend”.