An obituary in The Southeast Missourian lists Elaine “Tommie” Davis as the business partner of Mary Jane “Miss Jane” Barnett for over forty years (Elaine Davis Obituary). However, the family albums of the two tell a richer story, they were life partners as well as business partners, a radical act in mid-century America, and perhaps even a dangerous one in Southern Missouri. Their life together in Cape Girardeau, Missouri was recorded by over six hundred photographs, letters, and hours of home video. Out of these materials housed in the State Historical Society of Missouri in Cape Girardeau, the photographs of their personal lives are of particular interest. The family snapshot represents and reinforces particular narratives of what a family should look like, and how it should function. This is further emphasized in Christmas family snapshots. Thus, the family snapshots of Barnett and Davis, and in particular, ‘Christmas Holiday’, implicitly challenge the very culture that their lives were no doubt steeped in. The family album thus becomes a resistive force, whether consciously or unconsciously, against the pervasive heteronormativity and homophobia of both the time and place. 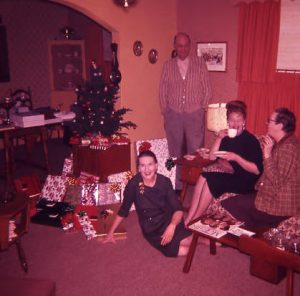 Family snapshots are easily identified from the subject of the photograph and how the subjects are framed. The family is more often than not happy, the photo poorly shot, and overall, barely indistinguishable from any other family photograph (Rose). ‘Christmas Holiday’ (fig 1.) is no doubt a family snapshot according to this definition. It has a ‘homemade’ quality to it, the result of an oversaturation of reds and a low resolution. The staging of the photo also emphasizes the intention of capturing happiness through the placement and participation of the subjects. Barnett is seated on the floor, posing for the camera, while Davis and the unidentified woman talk as if they are unaware of the photograph. Finally, the unidentified man stands as if caught between recognizing the camera and keeping his focus on the conversation.

These types of interactions, ranging from candid to staged, evoke a playfulness and earnest quality that is usually sought in snapshots, attempting to record and memorialize an atmosphere of familial happiness. The human subjects are not the only ones following conventions of family snapshots. The environment of this photograph is equally important. ‘Christmas Holiday’ records the Christmas tree and the gifts surrounding it, making the holiday itself another the subject of the photograph, which is reinforced by the title given to it. The act of gift giving is implied by this staging, which is itself a central convention of family in Bourdieu’s “On the Family as a Realized Category,” where the exchange of gifts is central to creating and maintaining family relationships. This function of enforcing family is connected to what he calls, “. . . the extra-ordinary and solemn exchanges of family occasions . . .” which in this case would no doubt include the ultimate American family occasion: Christmas.  Bourdieu argues that the recording of these occasions is vital to reinforcing the collective idea of family, and in affect integrate the participants of the photograph into the family.  The seeming replication of the conventions of the family snapshot in ‘Christmas Holiday’ may lead toward an impulse to separate Barnett and Davis’ sexuality and relationship from these pictures, considering that very few of the photographs in their collection explicitly portray them as a couple, with ‘Christmas Holiday’ as no exception. However, their relationship cannot be separated from the meaning of the photograph if there is to be any quality analysis done. Their sexuality and relationship most likely informed most of their lives, no matter how indirectly. There is no doubt that living together as partners must have had many consequences, or at least the implicit threat of such consequences in 20th century Southern Missouri. 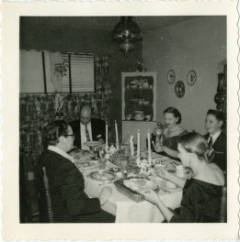 During the time of Barnett and Davis’ relationship, from 1938 until Davis’ death in 1981, Missouri was a hostile place for gay individuals. Both women attended university during the time of gay purges in higher education. Although there is little information on these purges, as most of these went undocumented, the University of Missouri (MU) is one instance where such information is available. This purge happened ten years after Barnett and Davis became partners, but the actions of MU most likely reflects many of the same perspectives that were held by Southeast Missouri State University during Davis’ time as a student. In fact, MU officials were only prevented from enacting the purge earlier because of lack of evidence (Nash and Silverman). This hostility was reinforced by laws that have only been overturned within the last decade. In 1986, five years after Davis’ death, the Missouri court case State v. Walsh, contested a state law that classified consensual same-sex intercourse as “deviate sexual intercourse,” criminalizing it as “Sexual Misconduct in the First Degree.” This law defined same-sex intercourse much more broadly than most state courts, creating an even higher risk for gay individuals. This court case was championed as a possible landmark case for gay rights in Missouri, however the Missouri Supreme 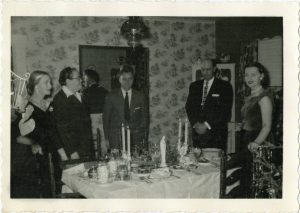 Court ultimately maintained the constitutionality of the law. The law was not removed until 2006 (Leonard pg. 165-167). This selection of records of homophobic culture of Missouri in the 20th century ensures that the sexuality of Barnett and Davis cannot be separated from any analysis of their snapshots. By looking at both the photo itself, but also understanding the historical and queer context of the lives it represents, the work family snapshots do socially can be more easily seen. It does no good to separate the creation of a snapshot from the snapshot, as the two are incredibly interwoven. A snapshot was not made for public consumption, but for the family itself. To understand the snapshot, we must understand the family. And in this case, the family of Barnett and Davis give ‘Christmas Holiday’ a subversive power. 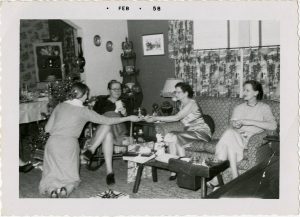 The relationship and life of Barnett and Davis challenge the conventions ‘Christmas Holiday’ portrays without any explicit work being done on the part of Barnett and Davis. The fact that their family is not a nuclear one begins to shed light on how this can be the case. Family mythologies of the twentieth century (Hirsch) are centered around the nuclear family, which presents itself as natural, historical, and far-reaching (Bourdieu). Barnett and Davis’ family is anything but. They had no children, and as heads of the household, neither Barnett nor Davis are men. Their friends, the unidentified men and women in their 600+ photographs, are placed in these photos much like family. ‘Christmas Holiday’ in particular makes this blending of friends and family clear. Holiday photographs, according to Bourdieu are actively “… consecrating the integration of the assembled family.” The work being done by ‘Christmas Holiday’ is no doubt a sort of integration of friends into the family of Barnett and Davis. They are not related by blood, but they are still positioned as kin within the context of a holiday family snapshot. This extra-familial kinship is extremely important for many gay individuals. According to Roseniel, “Sometimes rejected, problematized and marginalized by their families of origin, lesbians and gay men build and maintain lives outside the framework of the heterosexual nuclear family, grounding their emotional security and daily lives in their friendship groups .”