The Midwest region of the United States is composed of a variety of organisms that come from many different species and origins. From the western bank of the Mississippi River, to the eastern ridge of the Rocky Mountains, life of all forms thrive across this region. Some of these life forms originated here in the Midwest, while others traveled thousands of miles to call this region home. Species originally from the region in which they have evolved are known as native species (Why Native Plants Matter, 2017). These species are crucial for serving specific functions in the ecosystems in which they exist. On the contrary, any organism that is not native to an ecosystem and that causes harm to that ecosystem is considered an invasive species (Why Native Plants Matter, 2017). In the Midwest region, many invasive species are growing and reproducing rapidly. With an increase in climate change, invasive species, such as the Bush Hone 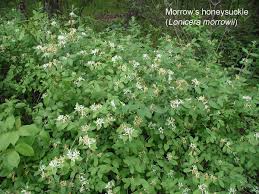 ysuckle, appear in the early spring and remain late into the fall, giving them a competitive advantage over native species of the same ecosystem. Due to climate change, invasive species, such as the Bush Honeysuckle, are becoming more prominent in the Midwest, which will cause a decrease in biodiversity and economic harm to the United States.

The average length of the growing season in the lower 48 states has increased by roughly two weeks since the beginning of the 20th century (Climate Change Indicators: Length of Growing Season, 2016). The length of growing seasons has increased in almost every state, but Western and Midwestern states are experiencing a more dramatic increase than states in the east. In the Midwest, growing seasons have increased at an average rate of 2.2 days per decade since 1895, compared to a rate of nearly one day per decade in the eastern states (Climate Change Indicators: Length of Growing Season, 2016). In recent years, the first fall frost has been arriving later, and the final spring frost has been occurring earlier than reported in the frost patterns of the 20th century.

Honeysuckle in the Midwest

Bush Honeysuckles thrive in the Midwest climate. Although these plants may smell and look remarkable, they significantly harm the ecosystems in which they inhabit. The honeysuckle plant competes with native plants for pollinators, which results in fewer seeds germinated in native species (Breath, n.d.). In addition to competing for pollinators, the honeysuckle plant also competes for soil moisture, nutrients, and may also produce a chemical to inhibit native plant growth (Breath, n.d.). This invasion decreases the biodiversity of native species that have been in the Midwest region for centuries. For example, native species to the Midwest region such as the Prairie Crabapple are beginning to slow in reproduction and growth rates due to the invasive honeysuckle plant. Prairie Crabapple plants are beneficial to the Midwest region for providing migrating birds with high-fat content needed for long flights. A decrease in the crabapple species creates a further decrease in species that thrive off of this plant. Invasive species negatively impact more than one species after they invade an ecosystem.

The Bush Honeysuckle originated in eastern Asia (Breath, n.d.). They were introduced into the Midwest region in the late 1800s for landscaping purposes (Breath, n.d.). According to Barb Sonderman, Greenhouse Coordinator and Instructor for Plant Science courses at the University of Missouri, “Climate change is occurring and it is increasing the spread of Bush Honeysuckle.” Sonderman also explained “Honeysuckle grows so well that it shades out native species, which changes the entire ecosystem completely.” There has been a major increase in the population of Bush Honeysuckle over the past twenty-five years. This plant consists of thick green leaves that leaf out early in the spring and block out sunlight from native plants. The honeysuckle’s vibrant red berries attract many different bird and small mammal species, but they provide little to no nutritional value to the consumers of this plant (Breath, n.d.). Instead, these berries are consumed by birds and small mammals and their seeds become dispersed into the surrounding areas. Fragrant white flowers appear on the bush and become yellowish as the plant matures, which attract pollinators (Breath, n.d.)  These characteristics greatly contribute to the spread and resistance of honeysuckle.

How can we maintain native species and slow the spread of invasive species such as the honeysuckle? By nature, invasive species are highly flexible and adapt to new environments more quickly than native species. This poses a challenge for repopulating native species in the Midwest region. Methods for controlling the spread of honeysuckle include hand pulling methods, cut-stump methods, and fire control methods (Breath, n.d.). The hand pulling method consists of entirely removing the honeysuckle by hand. This method should not be used in highly sensitive areas because it disturbs the soil and aids in the spread of other invasive species (Breath, n.d.). The cut-stump method involves cutting the bush off at the stump and applying a honeysuckle-killing solution with a sprayer to thoroughly cover the cut area to kill the plant entirely (Breath, n.d.). Fire control methods should be done in a safe manner. This method controls the spread of honeysuckle by burning the bush completely to the ground. Fire methods should be repeated every spring for several years in order to control resprouting (Breath, n.d.). Once the honeysuckle bushes are properly eradicated, then the process of reintroducing native plant species can begin. One major benefit of reestablishing native plant species is that they require low maintenance.  Some alternative native plant species that could replace honeysuckle are the Deciduous Holly, Crabapple, Plums, and Shrub Dogwoods. These are all plants that are native to the Midwest region and require low maintenance once they are reestablished. If honeysuckle is properly eradicated, then ecosystems in the Midwest will increase in biodiversity and productivity. In turn, this will also reduce the economic harm done to the Midwest by reducing the number of invasive species present in this region.

Climate change is occurring at an alarming rate. Today, the earth is experiencing warmer temperatures for a longer amount of time than ever before. In the Midwest, springs are beginning earlier in the year, and falls are beginning later in the year (How Climate Change is Helping Invasive Species Take Over, 2013). With an increase in temperature, there is also an increase in precipitation rates. These factors provide the perfect environment for the takeover of invasive species in the Midwest region. By understanding how honeysuckle spreads and becomes resistant, then management practices can then be put into place to reduce the spread of this invasion. With proper management, the spread of invasive Bush Honeysuckle will decrease, and plant biodiversity will occur once again in the Midwest.

variations in frost-free season in the United States: 1895–2000. Geophysical