MONTEVERDE, Costa Rica — Women in Costa Rica are rising out of the ashes and learning how to spread their own wings.

For a long time, and some would argue still today, women in Costa Rica were considered second-class citizens, mostly due to machismo, or masculine culture, where men believe they hold dominant roles over women. Even today, the female population is six times more likely to suffer abuse than the male population in Costa Rica (“Machismo 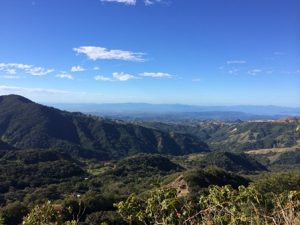 Mari Brenes, 75, who grew up in the small community of San Luis, shared her story of domestic violence from both her father and husband.

“The saying used to be, ‘Move out of the way because here I come!’” said Brenes, smacking her fist against her palm. “Women just got walked all over.”

When she was 10 to 13 years old, Brenes experienced severe abuse from her father, which she described as “violent and extreme.”

“One time he hit me so hard that I fell down and was cut open with a stick. He hit me so hard it broke the skin,” Brenes said, as she traced a line down her chest. “I didn’t even know what happened. I woke up in bed and saw I was all bloody.”

She continued sharing stories of abuse that followed her throughout childhood. Brenes said this was what made her act out and hide an affair from her father.

When she was 12 years old, Brenes had a daughter outside wedlock and was arrested when she was two months pregnant. She later moved back in with her father and suffered more abuse (Smedema, Young, 1998).

Guillermo Vargas, a local farmer and educator in Monteverde, said he recalled parents thinking school was a risk for girls.

“I remember some parents saying, ‘I won’t let my daughter go to high school because it’s a risk for her being pregnant,’” Vargas said.

In part of her written story, Brenes shared how sex education and information about menstruation were taboo topics. When she first received her period, Brenes said she thought she was dying.

Paradoxically, her lack of anatomical education, as opposed to attending high school, posed a greater threat, causing Brenes to conceive her first child.

“That’s probably in part how I ended up pregnant. So from all of that, I had a daughter,” Brenes said. “In the years after my daughter was born, my father hit me more, and the father of my daughter lived there as well. But my father also abused him with work. I told him to leave so he wouldn’t have to suffer, and I never saw him again.”

When her daughter was 6, Brenes remarried her current husband. Unfortunately, this new marriage led to another wave of abuse.

“It was a difficult marriage because he drank a lot and had a lot of alcohol problems,” Brenes said. “He would go out and get very drunk and then want to hit me.”

Gail Nystrom, founder of the Costa Rican Humanitarian Foundation, said alcohol is a huge problem in domestic violence cases. Abusive men are used to getting what they want and don’t take no for an answer.

“When someone says no to them, they don’t understand,” Nystrom said. “They’re actually quite cowardly, in my opinion.”

Teletica, a Costa Rican television company, the National Women’s Institute in Costa Rica and an ad by J. Walter Thompson brought awareness to the increase in domestic violence during soccer games. Police attributed the increase to alcohol consumption and frustration from the game (Fendt, 2015).

The scoreboard for Costa Rica’s World Cup qualifying game against Haiti on Nov. 13 showed a third score called the “Tercer Marcador,” or the third scoreboard, to tally the number of domestic violence calls police received throughout the game, according to the article.

At the final whistle, the scoreboard showed 30 calls. The article reported that police receive an average of 150 more domestic violence calls on game days than usual.

During Costa Rica’s match against Greece, the score reached 486 calls, according to the article.

“You can’t say that the machismo has died,” Gómez said.

The decrease of the machismo culture can partially be attributed to the expanse of women’s movements, foundations and cooperatives, like CASEM.

In 1982, eight women started a women’s cooperative to sell locally handcrafted items and make money independently from their husbands.

Gómez said the machismo culture led women to believe that they weren’t capable of doing anything but housework. They didn’t know what it was like to have money or make decisions with it.

CASEM created a community for women to come together and share their stories and skills and seek support from one another.

“This opened a lot of doors for us because if one just lives in a little world of home, then sometimes you can’t discover yourself, your own capabilities, your own skills,” Gómez said.

Through conversing, the women learned that abuse can take many other forms beside physical aggression.

“When we made a formal organization, then the men started to get suspicious and think that one was going to be counseling the other and giving her advice to not be so submissive,” Gómez said.

Today, 80 women and five men continue to work together at CASEM to support one another and uphold the business, which has thrived for 30 years.

The women at CASEM only meet once a month now, which Gómez said is due to other programs available for women to find support and learn about equality.

The Costa Rican Humanitarian Foundation is another example of a program to support women in Costa Rica. It opened family well-being centers as a way to aid single mothers who have experienced relationship problems.

Nystrom also reaches out to men in the community to teach them more about building relationships with women. The foundation offers sex education classes and distributes condoms.

“Whenever we see a man with a child, we make a big fuss and tell them they will be a great dad,” Nystrom said as a way to positively reinforce fathers who might otherwise see caring for children as a woman’s job.

“I am here almost every day, they know me, they see me in my car and walking around,” Nystrom said. “Domestic violence is talked about a lot, but the thing that’s tricky is that it’s subtle; it’s hidden. It looks like they’re equal, but they’re not.”

Vargas recognized that this machismo culture creates negative effects on the whole society.

“Men and women are both intelligent,” Vargas said. “But life and success is not only about what you turn into ideas. It’s also about intuition. In most cases, for many reasons, women are more ‘intuitivas,’ and many times, wiser.”

Today, Costa Rica needs to analyze the question of how machismo affects the current culture, he said.

“Maybe we men have been kind of intelligent to mask our machismo, and we ourselves don’t notice,” Vargas said.

The general consensus is that women in Costa Rica today will rise up out of the ashes of machismo to create their own beauty. This cycle begins with women like Brenes.

“Maybe there was something like machismo inside of me,” she said, “that I just wasn’t going to take it.”

Emily is from Westfield, Indiana and attended the University of Missouri in the fall of 2014 for its School of Journalism.  She chose to pursue journalism because she believes it is an effective intersection of her two greatest passions — social justice and writing.  She believes writing to be a potent tool for change.

At MU, she has written stories for the Columbia Missourian about race relations, policing practices, human trafficking, and more.  She was also able to study abroad in Costa Rica for international field reporting and write about the country’s masculine or “machismo” culture and how it relates to domestic violence.

After three years at the Missouri School of Journalism, she graduated in May 2017 with honors and received her Bachelor’s degree in Journalism with an emphasis in Print and Digital investigative reporting, along with a Spanish minor, a Multicultural Certificate, and a Digital Global Studies certificate.