Agriculture has faced its fair share of adversity. In the 1930’s and 40’s, it was the dust bowl. The 1980’s Farm Crisis was a byproduct of overproduction, poor investments, and bad decisions made during the boom years of the late 1970’s.  As a result, farmers were pushed to the brink of bankruptcy and many lost their farms.  In the wake of it all, strong leaders and devoted agriculturalists pulled through and rebuilt what was once broken.  Although today’s crisis differs in the sense that economic conditions have been relatively stable, agriculturalists are faced with their most daunting task yet.  A little over 7.5 billion acres of arable land worldwide has done its best to feed roughly that same number of people in 2016.  In the next 30 years, those same acres will be responsible for feeding about 9.5 billion people globally.  How can today’s farmer soften the burden of 2 billion more mouths to feed while retailers and food-chain entities breathe down their neck to create a healthier, more sustainable food source?  The answer: precision agriculture.

Precision agriculture has proven its value for both producers and consumers, linking critical relationships between inputs and outputs.  According to a study by the Economic Research Service, an affiliate of the USDA, the adoption rate of precision agricultural technologies has been less rapid than was expected fifteen years ago (Schimmelpfennig & Ebel, 2011).  Agriculture’s largest “hang-up” in the adoption of these practices is the initial costs of implementation.  Because of the shear volatility of the industry and market structure, farmers must make decisions based on current income, previous data, and commodity futures.  Unlike other sectors, where prices remain relatively constant or employees earn a true salary, farmers are faced with ever-changing input costs and uncertain growing conditions, government regulation, and variable market prices.  Referencing a USDA report regarding farm profitability projections (USDA, 2016), the farm sector profitability is expected to decline for a third year in a row.  Net farm income for 2016 is predicted at $71.5 billion, a decline of 11.5 percent from 2015.  Unsurprisingly, farmers tend to err on the side of caution when it comes to financials and investment decisions.

Even so, a related article published by Precision Ag Media points out that technology development is still way ahead of value creation (PrecisionAg Media, n.d.).  Essentially, technology is being released before farmers are able to understand how to use and implement it.  In a CropLife magazine publication, Dr. Erickson and David Widmar of Purdue University, conducted a survey of leading agricultural equipment dealers in the industry, and their results back this hypothesis.  They found that from 2015 to 2018, precision services are poised to jump forward. In 2015, adoption of variable-rate seeding systems (VRT’s) by row crop farmers was reported to be 27% and an increase of 11% is expected by 2018.  If this adoption is realized, it would equate to a 40% increase in just three years. (Widmar & Erickson, 2015). 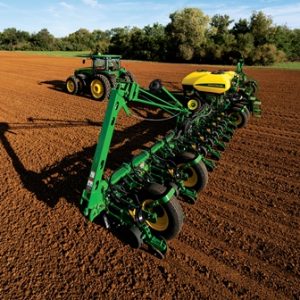 Equipment manufacturers such as Kinze and John Deere have helped revolutionize the art of planting, and companies such as Ag Leader have helped to make adopting these new technologies affordable.  Kinze offers a hydraulic weight transfer system that allows planters the ability to better adjust to changing ground conditions and maintain proper seed depth throughout each field.  John Deere has patented a feature called Active Pneumatic Downforce (shown in Figure 1) on planters that allow each row unit to adjust the pressure applied to each seed as it goes into the ground. Both systems are uniquely different, but serve a similar purpose.  Much like John Deere, Ag Leader’s Hydraulic Downforce applies variable pressure to each seed based on individual ground assessments. In contrast, the company designed its product as an attachment which means that farmers can install the Hydraulic Downforce to their existing planters without surrendering the capital required to replace them.  All three products have been proven effective and Randy Grudle, a farmer with cropland in Iowa and Missouri, testifies that the hydraulic systems are more precise than previous technologies (Gaines, 2014).

Of course, precision agriculture reaches far beyond the abilities and strengths of variable-rate seeding systems. In fact, Global Positioning Systems (GPS) were being introduced to farmers in the mid-1990’s, long before VRT’s were ever heard of.  The introduction of GPS and field monitors to the farming community marginalized human error and allowed for storage of field data from one year to the next. All of a sudden, farmers were able to recognize and correct any malpractices which may have led to the loss of tillable land or inefficient use of herbicides and other sprays.  Since introduction, these systems have undergone serious updates and the results have produced near perfect planting, greater yields, and the most precise field data yet.

All in all, agriculture has proven to be an adaptive, perseverant industry.  As mentioned before, the “Great Depression” of the 1930’s and 40’s took its toll. The “Farm Crisis” of the 1980’s was devastating. But moving forward, precision agriculture figures to be a positive force in helping to minimize losses from inefficiency and maximize yields per acre.  The greatest advantage, however, is that more bushels of grain will reach secondary markets all over the world than ever before.  All these, positively contributing to a larger, healthier harvest, will surely result in a more sustainable and bountiful food source for generations to come.

is a Junior Agri-Business major in the College of Agriculture, Food, & Natural Resources. He is actively involved on campus, serving as an ambassador for CAFNR, president of Mizzou’s National Agri-Marketing Association student chapter, and as a student assistant in the Department of Applied Social Science’s Commercial Ag Program.