According to Warren Belasco, what defines a family holiday meal is its planning, its timing, its timelessness, and most importantly – its meaning. My family’s annual Thanksgiving is planned by my grandmother on my father’s side of the family at least weeks in advance. This is when she starts making her homemade cranberry bread. Sometimes she even has a few loaves ready by Halloween. She usually makes enough for each of her four kids (and the eight grandchildren between them) to take a couple of loaves home after Thanksgiving, where at least four or five loaves are devoured before dinner even begins. Dinner is usually somewhat of a potluck, with each family bringing a minimum of one dish to set atop the air hockey table that we use for the buffet. This year my mother made a rice-and-broccoli casserole and the berry-pretzel-jello dish she makes every year, the one affectionately referred to by the whole of my family as some iteration of “that jello stuff”. 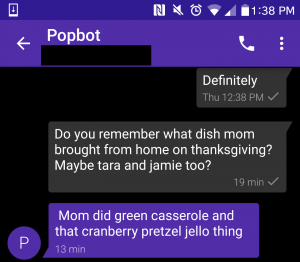 One of my dad’s sisters brought too many pies and a large, multi-tiered fruit tray that looked so good you didn’t want to eat it. The other brought corn and an appetizer tray with pickles and olives. My uncle’s fiancée prepared pickle-salami-cream cheese wraps as well as a sweet potato casserole. My grandmother, as she normally does, spent the days before Thanksgiving fixing the turkey and stuffing as well as an ungodly amount of mashed potatoes (as in not even a god could eat that many mashed potatoes, though my brother tried his damndest). So my family’s Thanksgiving fits the mold when it comes to planning our comfortably predictable dinner, but it’s also chocked full of meaning.

The main event of our Thanksgiving, oddly enough, is not the meal. For the past thirty years my family has prepared fried cauliflower on Thanksgiving. The tradition goes back to my grandmother’s mother, my great grandma Zeller, who brought to the family the magic of frying cauliflower and continued doing so until she succumbed to cancer shortly before the Thanksgiving of 1985. My grandmother, overwhelmed by the hard work she put into the meal as well as having to take care of a young child, decided the next year that frying cauliflower for Thanksgiving would have to go. Horrified, my fourteen-year-old father decided to keep the still-young tradition alive by taking it upon himself to not only fry the cauliflower, but also to recruit the help of his new baby brother and my curmudgeonly grandpa (a feat in and of itself). Born from this was a new tradition in which the boys of the family come together to batter and fry the cauliflower while the girls are finishing the final preparations for the rest of the meal. What started with my father, his brother and their father has grown to also include myself and my brothers as well as my father’s brother-in-law and his son (my cousin).

It begins with several heads of cauliflower bought and pre-cooked by my grandmother, then broken into pieces that are the appropriate size for shoving into your face. On the kitchen table is an assembly line of bowls and dishes that ends with two tabletop deep fryers. The first step consists of coating all of the cauliflower in flour. This is usually done, with the help of their father, by the youngest boy who for the last eight years has been my cousin Matthew. Part of the reason for this is because it’s the least messy of the 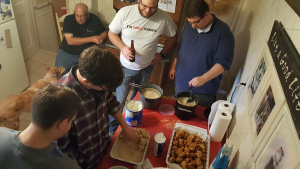 My brothers, Uncle, Grandpa and I

steps, or at the very least the easiest to clean up. Another reason is because all of the kids in my family grew up playing with their Hot Wheels in trays of flour, so it provides a sense of familiarity in a setting that’s very unique to a new family member. After the cauliflower become cauli-floured, they’re handed to whomever is working the second station. The division of labor between the flour step and the fryer step is usually first come-first serve. This year my youngest brother, Jack, dunked the floured cauliflower in egg and then dropped them into my pan of bread crumbs, the last step before the cauliflower fulfill their dharma and take the plunge into a vat of boiling fat.

Experience is what determines who runs the fryer. Historically it’s been my grandfather because, naturally, my family’s fryers have character and therefore require some tact in order to get them to work just right. However in recent years my brother Joey and I have taken turns with the fryers because of our experience in fast food, though the fact that we’re the two oldest boys surely plays a part. While it isn’t an explicit “coming of age” event, there’s definitely a sense of achievement that comes from accepting the responsibility of working the fryers. The process of battering and frying all of that cauliflower usually takes around thirty to forty five minutes, if not more.

Something I’ve noticed is that the older you get, the more time you spend preparing the cauliflower. The younger boys of the family usually get bored because they have neither the attention span nor the feelings of nostalgia associated with frying cauliflower to keep them engaged. Interestingly enough, this year was the first time I remember my grandfather stepping back; in fact, I don’t know that he actually fried any of the cauliflower. Instead he sat back and enjoyed eating the fruits (vegetables?) of our labor and taking in the fruit of his family tree. Both his family and my grandmother’s family have had various fallings-out within, so I know he savors the time we spend and enjoy together as much as the breading on the cauliflower.

Once all of the cauliflower is ready the meal commences. The basement of my grandparents’ small home in Florissant, Missouri is turned into a dining hall, with all of the dishes of food adorning an air hockey table draped in a table cloth. My grandfather sits at one end of the two dinner tables we push together while my grandmother sits at the other end. The other seats are organized by immediate family, though my brother sits away from me and with our cousins, a relic of when we were constantly at each other’s throats growing up. After grace and before we eat, my grandma recites a poem. The poem is about what a family is and has a magnet on the back that keeps it on the fridge throughout the year. My grandpa sits closest to the food and is always first in line (something my dad always busts his chops for) but this year I helped my grandmother through the buffet first. She broke her leg after getting hit by a car earlier this year and 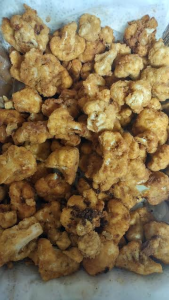 What it’s all about

still pulled together the perfect Thanksgiving that we always have, so giving her dibs was the least we could do. Engorged on appetizers and cauliflower, the actual eating of food takes place in all of twenty minutes. The meal, however, lasts hours. The limited seating in the basement means we all just hang around the table, talking and laughing and periodically picking at scraps. We go around the table and say what we’re thankful for in our lives and inevitably the whole of the table says they are thankful for the people sitting there with them. There’s a collective cleanup effort, the paper plates we use make that easy, although my grandma is adamant about using her nice silverware and almost always ends up digging through the trash to make sure no one threw a fork away. After the meal is over leftovers are divvied up in a surprisingly diplomatic way, though my dad always gets a few extra cauliflower because it is “his” tradition.

My most favorite tradition

About six years ago, just after my mom gave birth to my little brother, she proclaimed with a strong convincing voice that she couldn’t handle it anymore. Preparing Thanksgiving Dinner that is, and taking care of my brother, and cleaning and everything else that goes along with a homemakers duties. My mom informed me she would have to stop making fried cauliflower because it consumes so much time and effort, which she no longer had.

With that, he questioned, “What do you want?” “I want to start a new tradition. You and me making the fried cauliflower,” I remarked very enthusiastically. Inevitably, he retorted, “Go fly a kite!”

After several minutes of begging, pleading, and compromising, he gave in, but we absolutely had to bring a television into the kitchen and turn on the football games. My mother was not too happy with that, but at least we were helping…for once.

We gathered the pre-cooked cauliflower from my mom and we then carried the flour, eggs and bread crumbs over to the table and lined them up ever so carefully. We thought we were master chefs. We scurried to the bathroom to scrape the flour eggs, and bread crumbs that seemed cemented to our fingers.

The cauliflower was a bigger hit with our relatives than the year before, when my mom made it. My Dad and I didn’t receive as much as we wanted. The next few years we performed better and better until my little brother decided he wanted to become a master chef too. In fact, he preferred to do it all by himself with no help, until the “cement” started to form on his hands. From then on, he wanted no part of our tradition.

So every year, my dad and I would prepare the cauliflower. This was our only father-son bonding time since Boy Scouts. I really look forward to my favorite holiday of the year so my dad and I can continue our tradition.

This past year was our most experience year and we flaunted it. We had a bigger, better deep fryer and four heads of cauliflower. We produced all of the heads in a little over an hour. My dad did all the cooking and I did all the dipping and we shared in all of the conversation. Surprisingly, my dad did not watch much football that day.

Six years ago I rationalized that this weak tradition would deteriorate in a year or two, as most of our so-called traditions do. However, I am happy to say that this is the strongest, most treasured tradition I have. With each passing year, Thanksgiving Day becomes more and more special.

And here we are 24 years later, THIRTY YEARS after the first fry. A rich tradition that I think will live to see another year. 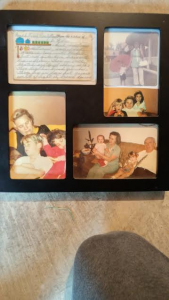 The original recipe for fried cauliflower accompanied by pictures of my father and his sisters with Grandma and Grandpa Zeller. 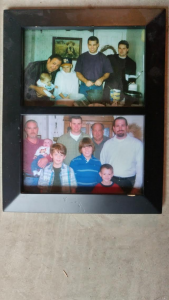 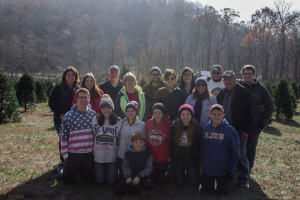 We always go Christmas Tree cutting the Saturday after Thanksgiving. Note: This is what it’s Really about. 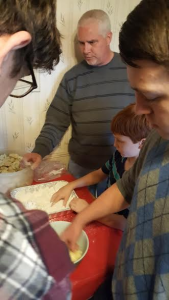 Young One on the Flour 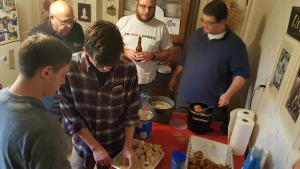 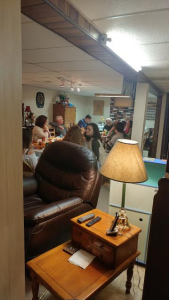 We finished eating an hour before this photo was taken

Ryan Silver is a senior majoring in English and Digital Storytelling. He transferred to MU from UMSL in 2015 and plans on graduating in Spring 2018. He is currently an intern with The Missouri Review and enjoys writing and playing music with his friends in his freetime.