You’ve been anticipating this appointment all week. Since your last appointment, when the woman with the bobby, curly hair held you gently and changed your mind— convinced you that you weren’t crazy.

Your dad, an immigrant from the Bengali region who worked for his meals since he was eight. Your mom, who had outsourced her world view to her husband, compassion and all. She was a wife now.

It wasn’t until you showed your suite-mate at the university the scars on your legs, like bicycle tracks where life had ridden over you, that anyone told you that you could get help, that you needed help.

She assured you there were resources on campus where you could find more people who understand and who care. The two of you bought ice cream and watched cartoons and cried together. She stayed with your glowing body after you fell asleep. She put you on the assembly line of love. She held you.

The women at the front desk in the health center, the next phase of the assembly line, smiled the same way your roommate did when she dropped you off. They had dyed hair. They held you while you made an appointment.

You sat with your sweaty hands stuck to the clipboard:

The woman with the bobby hair finally came out and called your name. The rails hummed as you made your way further down the line, from one pair of careful hands to the next. She brought you out of the sterile lighting and into her office. It was dim and orange, and she begged you to sit in chair that felt like a big marshmallow. You were both from Chicago. She smiled sadly when you told her about your mother’s hormonal diagnosis, when you told her it probably wasn’t that bad. She made you want to say more, until you told her that you felt like you were drowning.

It is, you thought. It occurred to you right then. But you couldn’t say so over tears that were coming now. Ten years’ worth.

So, she just held you.

You felt that you had been able to pass off some of what you’d been carrying, like when you made your little brother carry your saxophone home from school.

Lighter now, you felt like you were flying towards a cure. In one week the bobby-haired woman was going to deliver you to someone else. You believed they would hold you too. You were on an assembly line of love that you’d never known, but you found it so easy to let them hold you, after holding your miserable self for so long.

You waited with your clipboard again, feeling slightly heavy, when your name was called by a woman with a falling curtain of hair. The woman brought you out of the sterile lights into her empty office, brighter than the waiting room. The wooden chair that she did not ask you to sit in poked you in the back. The rails on the assembly line creaked and shook. You felt cold. She looked at the phone in her hands while she asked you questions.

“Have you tried exercising and eating better?” she asked.

Had you? You felt crazy again.

“Where are you from?”

“What dosage would you like to start on?” she asked, eyes on her phone.

You remembered climbing onto the kitchen counter and eating all your Flintstone’s Vitamins. Your mother held you while she called poison control.

You walked back into the dorm with tears blowing off your cheeks. Back in your dorm, you stuffed your prescription into the wastebasket and fell to the floor. 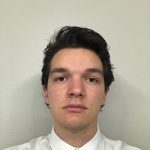 Michael Wilmarth is a Senior at the University of Missouri majoring in English.