As the human population grows, the task of producing enough food for everyone becomes increasingly difficult; by 2050 we will need to produce enough food for 2 million more people. To meet current food demands, an industrialized agricultural system has been created including concentrated animal feeding operations (CAFOs). Concentrated animal feeding operations make it possible for us to eat $1 burgers and enjoy a cheap meal, but their negative impacts are complicated and interwoven with other problems facing society. A few of the most serious aspects of CAFOs to consider are their ability to pollute water, their contribution to climate change, and how they can be improved.

What is a CAFO?

The United States Department of Agriculture (USDA) defines a CAFO as, “a large animal feeding operation with more than 1000 animal units confined on site for more than 45 days during the year.” In addition to this requirement, “any size animal feeding operation (AFO) that discharges manure or wastewater into a natural or man-made ditch, stream or other waterway is defined as a CAFO, regardless of size.”

Regulations are in place to keep CAFOs away from surface water and big towns across the US; however, many challenges are associated with managing one of these sites. Concentrated animal feeding operations can make significant contributions to water and air pollution, climate change, and increase public health and animal welfare concerns—as well as many other issues. Each one of these negative impacts is complicated, so it’s important to understand a few major aspects of CAFO’s impacts to analyze the whole picture.

CAFOs inherently produce very large amounts of waste and not enough land to dispose of it, which causes a variety of problems that aren’t fully understood. Dr. Enos Inniss, an Assistant Teaching Professor in the Civil and Environmental Engineering Department at the University of Missouri and a member of the MU Water Resources Research Center explains, “we learned a long time ago that a large concentration of animals or people creates a waste stream that cannot be easily handled by natural processes. For this reason, it is imperative to collect, store, and treat wastes and wastewater from CAFOs.”

As long as the waste water is treated how Dr. Inniss suggests, water pollution problems are minimal. Runoff and leaching of the manure into surface and groundwater, however, is far too common. A study published in 2015 in the journal Science of the Total Environment by Heaney et al. found, “diffuse and overall poor sanitary quality of surface waters where CAFO density is high.”

The phrase “poor sanitary quality” should be cause for alarm among Americans who rely on surface water sources every day, because this polluted water can cause complex and unknown impacts on human and environmental health. Another study published in Environmental Health Perspectives states that needs exist for thorough and consistent ecosystem monitoring near CAFOs along with better characterization of major toxicants affecting human health and the environment.

Time and time again experts stress the importance of strict monitoring and treatment, yet the USDA only “encourages voluntary actions to minimize potential pollution.” The industrialized industry containing these animal feeding operations experiences minimal oversight and makes large profits at the cost of human and environmental health.

In addition to the tangible physical waste coming from these feeding operations, CAFOs significantly impact global climate change. To understand the role of CAFOs in this process, one must understand how climate change works. To keep earth warm, sunlight enters the atmosphere and provides energy in the form of heat. This energy is radiated back but cannot escape the atmosphere because it gets absorbed by greenhouse gas molecules and re-emitted in all directions, thus warming the earth.

Climate change refers to many changes in weather patterns over periods of several decades or more; Earth’s climate always changes—but never as quickly as it is changing now. According to NASA, recent increased warming is caused by human addition of greenhouse gases to the atmosphere, consequently increasing heat trapped in the atmosphere. A changing climate will lead to a host of problems (some of which are already occurring) such as more extreme weather events, food insecurity, drought, and flooding.

CAFOs and Climate: How CAFOs Contribute

The United Nation’s Food and Agriculture Organization (FAO) states that 18% of global greenhouse gas emissions are directly from livestock production, this is more than all the emissions of the transportation sector. Not only are animals from feeding operations releasing substantial amounts of greenhouse gases, they are also decreasing the resilience of environments to recover from their increased emission. Making room for large animal agricultural operations happens quite frequently in the form of deforestation. This reduces the amount of vegetation in an area and, hence, inhibits the processes that can minimize diffusion of greenhouse gases in the air.

While CAFOs directly increase the emissions of greenhouse gases, they also rely on fossil fuels and natural resources to maintain their production. Countless resources such as water, fertile soil, and fossil fuels are used to grow feed for the large number of animals held in feeding operations. In addition to resources used to nourish the animals, pollution is created and money is spent to create packaging for the meat. Once packaged, even more resources are used, and more greenhouse gases are emitted to transport the finished product across the world.

Ways to Improve the Industry

The current situation with CAFOs appears to be an endless cycle of pollution, waste, and consumption, but change is possible. The best way to reduce the negative impacts from CAFOs is to create and enforce increased regulations on these operations.

The government must support the appropriate agencies to enforce oversight of ethical and sustainable management of CAFOs. More research on CAFOs needs to be funded so their waste effects on human health and the environment can be understood. In addition to these regulatory changes, a federal standard should be created to educate agricultural producers and companies on CAFO safe management practices and make standards so the public knows where their meat is coming from.

While widespread, systematic change will be most effective in reducing negative impacts from CAFOs, each one of us can make a positive impact on a personal level. The purpose of agriculture is to produce food for everyone—and the industry will supply what consumers demand. That means that consumers all hold power in what is purchased. Purchases can be used as a “vote”.

Concentrated animal feeding operations are needed to produce enough animal products to meet demand. The products generated from these operations make it possible for meat to be available to the masses at low prices and while this is beneficial for many Americans economically, the whole cost of the food produced is not being paid. Water pollution from CAFOs creates unsafe living environments for people nearby and can cause serious illness. Greenhouse gases are released from CAFOs into the atmosphere and increase the rate of climate change—these costs are not being properly addressed.

The way the system works now is fine for a short period of time, but if it continues to be sustained for decades, the effects could be irreparable. The global population continues to grow, but there is a finite amount of fresh water that can be polluted with waste from CAFOs, reducing the amount of useable fresh water. As the climate continues to change, lives and homes will be lost as adaptations occur. If we continue to indulge in cheap, mass produced meat, our children will pay the price. It is vital that scientists and the public alike come together to reduce the effects from CAFOs and work to find a better alternative for the future. 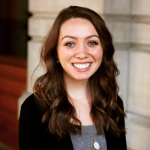 Chloe Gossett is a senior at the University of Missouri majoring in Environmental Science.

A Five-Step Plan to Feed the World. (n.d.). Retrieved October 17, 2017, from http://www.nationalgeographic.com/foodfeatures/feeding-9-billion/