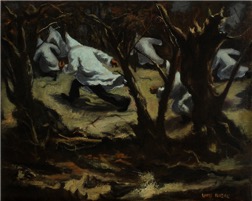 You can’t seem to have one without the other.

It is their contrast that brings out their beauty.

Clouds on a spring afternoon, the dandelions in the pasture out back, the warm milk Ma brings us before bed.

White has always been a sign of comfort and beauty in my eyes.

Yet in the dead of the night, these flashes of white intermittently through the thick of the forest bring tension, complete and utter fright.

I note their pointed caps and immediately think of the needle on a compass.

Not in specifics, more of a passing statement.

“The men are on a hunt tonight, John told me about it earlier today.”

Running from the town up the creek it appears, Pop says to never stray that far from home.

Timmy told me about the pointed hat men and I wanted to see for myself.

Even though I know nothing about them, they make me feel uneasy, uncomfortable… frightened.

Maybe the pointed hat men are frightened as well, maybe that’s why they wear their hats?

They conceal their identity while masking their own feelings.

It was almost like I dreamed the whole thing.

And there I stood, alone in the darkness.

I always thought the color white was supposed to be a reassuring sign, a light, a beacon in the darkness.

Oh how I was wrong, never have I felt so much more comfortable engulfed by the black of the night.

Tonight white was a siren, white was on fire, burned into my memory forever. 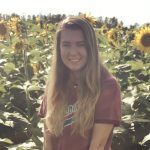 My name is Rebecca Bajek and I am a sophomore graphic design major at the University of Missouri. My submission for this program was for an ekphrastic writing assignment for my African American Visual Culture class. We had to choose from works presented to my class at the University of Missouri Museum of Art and Archaeology. I chose to write I short poem about the piece Nocturne by Louis Ribak. My writing experience pretty much stopped in high school, so it was refreshing to write creatively for this assignment.