Consumption of plastic and efforts to reduce plastic waste have been a popular topic of the past year. When a video showcasing plastic straw litter went viral, many businesses, such as restaurants and dining chains, stopped providing plastic straws unless by request. Struck by the amount of plastic in the ocean, many took a pause to re-evaluate their use of plastic drinkware and disposable containers. 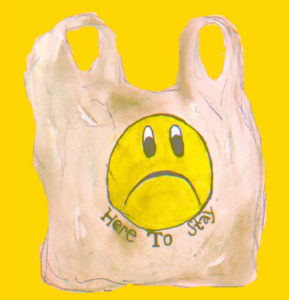 Following widespread social media outcry against plastic straw-use and plastic litter fated for the ocean, many communities across the country quickly instituted bans on disposable plastics. According to a 2018 CNN article, cities across the country such as Monmouth Beach, New Jersey; Miami Beach, Florida; and Berkeley, California; have all passed laws banning plastic straws over the course of last year. Seattle outlawed both plastic straws and disposable utensils in July of 2018. Judging from these examples alone one may believe that city policies restricting disposables could lead the way in curbing disposable plastic use. However, Missouri state legislation currently curtails a community’s ability to regulate its own use of plastics.

During the 2015 general session the Missouri Legislature passed House Bill 722, which outlawed district ordinances increasing the minimum wage as well as outlawing ordinances banning or taxing plastic bags state-wide. During the spring of 2018 the legislature considered a bill which would expand this legislation to all disposable containers. Although the 2018 legislation did not pass, HB 722 still remains; and further attempts to expand the law could occur in the future. The legislation effectively bans local governments across the state from choosing their own level of environmental regulation; while perpetuating the negative effects plastic litter can have on freshwater ecosystems, agriculture, and Missouri’s parks and outdoor spaces.

Outlawing bans on plastic bags is neither representative of Missourian’s interests, nor beneficial to the state as a whole. The 2015 legislation was put forward as a pro-business bill, but who the bill would actually benefit is debatable. One beneficiary may be the legislation’s sponsor, State Representative Dan Shaul. According to the Representative’s biography on the Missouri House website, Dan Shaul has had a career with the Mid-America Grocer’s Association and the Missouri Grocer’s association for decades. According to Kansas City news station Fox4kc, many grocers have come out against plastic bag bans, as supplying paper bags for customers is more expensive.

House Bill 722 states that “no political subdivision shall impose any ban, fee, or tax upon the use of either paper or plastic bags”. This language mandates that counties, cities, villages, and districts across Missouri have no say in plastic bag ban or taxation decisions themselves. Communities may well be instituting their own plastic bag ordinances were it not for the legislation prohibiting them from doing so. According to the Columbia Missourian, in 2015 Columbia was moving forward to institute a ban on plastic bags before the city council voted to withdraw the ordinance after some controversy stemming from concerns raised by Columbians over potential increased costs for consumers. Since this time governmental action to discourage plastic bag use has all but ceased, while plastic bags continue to pollute Missouri’s environment and accumulate over time.

When considering plastic waste, the majority of public concern and research efforts have been focused on the ocean. Plastic waste, however, is not discriminatory. A good deal of the litter humans toss out remains nearby, while the remaining waste travels downstream. As the sun, wind, and water wear on plastics which find their way outdoors, the waste may break into smaller and smaller pieces, becoming micro-plastics, or plastic particles less than five millimeters long. A 2018 article by the BBC investigated high levels of micro-plastics and toxins in Lake Geneva, Switzerland. Scientists approached on the issue stated that because micro-plastics are a very recent addition to the natural environment, there is little data to draw from, and it is difficult to predict how micro-plastics may affect human health and the environment.

The issue of micro-plastic contamination is not isolated, and freshwater micro-plastics have been documented in the United States. A 2016 study published in the Journal of Environmental Pollution found that forty five percent of sunfish captured in a Texas river contained micro-plastics. Fishing is a popular past-time in Missouri, and as many fisherman eat their catches, there is reason for human health concerns. 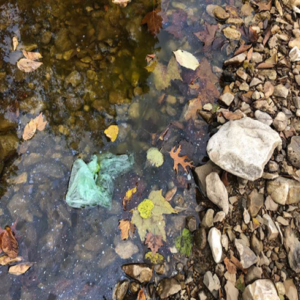 Emily Samuels, 21, is an avid angler and birder from Fordland Missouri studying wildlife biology at Kansas State University. The amount of plastic she has seen in streams, creeks, and rivers on her outings concerns her. “The plastic everywhere is horrible, trash from campus seems to be easily transported to the nearby stream because it is so lightweight. I recently saw a dead Franklin’s gull while hiking in the area, it didn’t look sick or appear to be injured so I wonder if it had swallowed trash and choked on it.”

As plastic waste may damage wildlife and the natural environment it can also damage industries which rely on the integrity of natural resources. According to the Missouri Economic Research Brief, there are an estimated 97,700 farms in Missouri, which is the second highest number of any state in the country. Farmers invest heavily in their livestock, and do what they can to protect their animals and keep them healthy. There has been little research to evaluate the impact plastic waste may have on livestock. However, accounts of cattle swallowing plastic bags and starving have been reported in what has been coined “plastic bag syndrome”.

Mysterious cattle deaths in which the animal has died without any sign of injury or disease could be attributed to ingestion of plastic waste. According to Drover’s, a beef management magazine, plastic litter in cattle pastures poses a significant threat to livestock. When a cow swallows a plastic bag, the litter may become stuck in the animal’s digestive tract; slowly starving the livestock by preventing it from properly digesting feed. Livestock are an important resource to any farmer or rancher; and as plastic waste accumulates, awareness of plastic bag syndrome continues to grow.

When plastic litter enters a state park or natural area it may not only be harmful to wildlife, but is also disruptive to the natural beauty of the environment, and experience of park guests. Paul O’Donnell is a senior geography student at Missouri State University, and has worked as a park ranger during summer since high school. During his time spent at Ozark National Scenic Riverways plastic litter in parks bothered him most. “Plastic waste is a big concern; not just for animal welfare, but because it is some of the most visible waste from the trail, and makes the park look trashed. You can think of it as like the broken window effect, people seem to be more comfortable littering when walking on a trail already strewn with trash.” 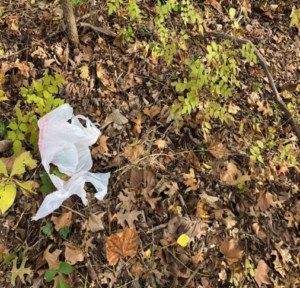 Most parks are equipped with trash cans and some even with recycling bins, but even if people throw away their trash, plastic may still find its way into parks. Plastic may escape garbage trucks touting the waste to a landfill, as the highly mobile material is easily transported with a gust of wind. According to a Missouri Department of Natural Resources representative, most of the state’s open landfills are maintained by laying soil depositions over landfill waste. As soil may be uncovered by strong rains or storm events; plastic may escape from the landfill with a strong gust of wind. After plastic has escaped, it is highly mobile; so there is no telling where it will end up.

Plastic bag litter impacts Missouri in so many ways. It ruins the beauty of Missouri’s forests, parks, natural areas, and outdoor spaces. Plastics have the potential to harm Missouri livestock and aquatic life, and research is just beginning to illustrate the negative effects plastic waste may have. Micro-plastics and leaching of products and plastics dumped in water may have direct consequences on human wellbeing. Although Missouri is landlocked, it is not exempt from the consequences of plastic bag use so often associated with the ocean. To clean up the environment and protect it from future degradation, disposable plastic consumption must be curbed. We can all make a choice to limit our plastic consumption, however, industries and politicians also have their hands in the pot. In 2019, we must challenge ourselves to do more than carry canvas bags in to the supermarket, and opt out of a straw. To make a sizable difference in plastic waste, we need to broaden our horizons; to not only evaluate our own habits, but to be critical of the policies that the legislators who represent us put in place. An email, phone call, or letter to a legislator, addressing the issue of plastic waste, amplifies the individual impact to become community, state-wide, or even nation-wide change. 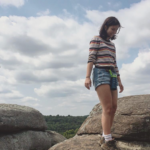 Ashley Hollis is a Senior Environmental Science major from Springfield, MO. Ashley has been following environmental policy since attending an environmental camp in high school, and loves to garden, read, and bike in her free time.

https://dnr.mo.gov/env/swmp/specialprojects.htm (The most recent Missouri Department of Natural Resources Waste Composition Survey shows estimates how much waste the state has produced, and includes categorical estimates for waste including plastic.)

http://www.itla.com/Plastic-Disease (The International Longhorn Association’s take on cattle ingesting plastic. The ITLA details reports of mysterious cattle deaths and what may have went wrong.)

https://www.sciencedirect.com/science/article/abs/pii/S0043135418302835 (A study from an August 2018 Water Research issue, which outlines how micro-plastics interact with toxic chemicals in water.)

https://www.fda.gov/cosmetics/cosmetics-laws-regulations/microbead-free-waters-act-faqs (Information from The Food and Drug Administration on the 2015 Micro-bead free waters act. This legislation increased public conscious-ness of micro-plastics and began the phase-out of microbeads from cosmetics)