Behavioral science researchers have long gravitated toward conducting and publishing research using Western, Educated, Industrialized, Rich, and Democratic (WEIRD) test subjects, while often seeking to generalize results beyond this very specific population (Henrich et al., 2010). Abraham Maslow, most well-known for his Hierarchy of Needs, is a clear example of a researcher from a WEIRD society, namely the United States (Strickland, 2001). Though Maslow noted that motivational differentiation could occur across different cultures, he deemphasized this possibility, placing greater importance on the belief that the basic needs he asserted were less likely to change cross-culturally than the more superficial needs of clothing, food tastes, etc. (Maslow, 1943). Henrich et al. (2010) warns that research, which claims to describe “human nature,” often fails to utilize a representative sample, nullifying the ability to apply results beyond the specific population.

Latino migrant farmworker adolescents are a non-WEIRD population in the United States. These adolescents migrate from largely developing Latin American countries wherein financial stability and job opportunity are limited (Carlos Chavez, Gonzales-Backen, & Perez-Rueda, in press). It is likely that their cultural experiences during their upbringings in their home countries differ from those of U.S. adolescents in the individualistic cultural dimension. To illustrate, Hofstede’s (2010) metric to evaluate the level of individualism displayed by a specific country shows that Mexico and Guatemala scored low on the individualism index. Specifically, “Mexico scored 30 out of 100 while Guatemala scored 6 out of 100”, thus indicating that Latino migrant adolescents come from highly collectivistic societies (Hofstede, 2010, pp. 96-97). On the other hand, “the United States scored 91 out of 100” on this same metric (Hofstede, 2010, p. 95), thus highlighting the individualistic context and mainstream values Latino migrant adolescents navigate while working in U.S. agriculture.

Collectivistic societies value the family above all else in exchange for absolute allegiance. In contrast, individualistic societies value individual personal responsibility and independence (Hofstede, 2010). Although personal values reveal the importance of life goals and guiding principles which indicating an individual’s motivational nature (Schwartz, 1992), there is also strong evidence to suggest that cultural values influence human behavior and decision-making (Markus & Kitayama, 1991). Perhaps not surprisingly, at the core of Latino migrant adolescents’ migration for international work in U.S. agriculture is family inter-dependence and group well-being (Carlos Chavez, Gonzales-Baken, & Grzywacz, in press).

When exploring the individualistic cultural influence of Maslow’s conceptualization of motivation through his Hierarchy of Needs, it becomes evident that a critical review is needed when seeking to apply this hierarchy to non-WEIRD populations. We argue that Latino migrant farmworker adolescents represent a population within the United States whose collectivistic upbringings inform alternative higher motivations than those originally proposed by Maslow. In the present research, we seek to explore the extent Maslow’s original theory applies to Latino migrant adolescents in U.S. agriculture, before suggesting a more culturally-appropriate model that can take into account cultural influences (i.e., collectivistic endorsement) among Latino migrant farmworker adolescents.

Recruitment. The present study is part of a broader research grant whose recruitment and data collection procedures were approved by the Institutional Review Board (IRB) at Florida State University. A National Institutes of Health Certificate of Confidentiality was also obtained to protect participant anonymity.

Interviews. In-depth semi-structured interviews were conducted with a sample of Latino migrant farmworker youth (n = 20). Participants provided their own informed consent. Interviews were conducted in Spanish at diverse locations including a private office space, youth’s farmworker camps’ kitchen, and mini markets’ parking lots. Informed consent was read and explained in Spanish. Participants were told they could terminate the interview at any time. Recorded interviews were transcribed verbatim in Spanish, and each transcript was assigned a pseudonym to protect participants’ identity (e.g., Participant 01).

Data Analysis.   Deductive analysis was conducted to determine the applicability of Maslow’s original Hierarchy of Needs to the studied population. Specifically, we focused on the ways Maslow’s theory fits the basic “survival needs” of Latino migrant youth in U.S. agriculture. To do so, we previously engaged with the theoretical framework at hand before the analysis of the interview data (Braun & Clarke, 2006).

This qualitative exploration highlighted that as Latino migrant adolescents progress through the hierarchy toward higher motivations, Maslow’s original hierarchy fails to accurately convey their motivations. This is in great part due to the emphasis on individualistic orientations from the model that fails to include the collective realities, backgrounds, and values of Latino migrant adolescents endorse from a very young age. Through deductive methods, Maslow’s Hierarchy of Needs was found to be successful in describing the most fundamental needs of Latino migrant farmworker youth: physiological and safety needs.

The foundational tier of Maslow’s Hierarchy of Needs is labeled “physiological needs,” described as the bodily drive for homeostasis and fulfillment of appetites (Maslow, 1943). Water, food, and sex are examples of these physiological needs (Maslow, 1943). Essentially, this tier describes the most basic of human needs for survival. Without the fulfillment of these needs, an individual is unable to pursue higher motivations and potentially will die (Maslow 1943). Thus, these essential human needs can be perceived as universal. Regardless of culture, all humans have basic necessities for life. Latino migrant farmworker adolescents are no exception to this, thus physiological needs were shared among this population. Ignacio, a 20 year old Mexican youth stated: “I save it, well, I have needs like everyone else, right? To clothe oneself…to eat, and the rest [of my money] is saved.”  Similarly, Hugo, a 17 year old Guatemalan youth added: “…I am happy because I have, I have something, I have food, I have everything and my family also has it.” Upon satisfaction of these physiological needs, as demonstrated in the quotes above, Latino migrant youth are able to pursue the next highest motivation: safety needs.

The next tier of Maslow’s Hierarchy of Needs, which arises upon fulfillment of the individual’s physiological needs, is labeled “safety needs;” these are delineated as the pursuit of a sense of security, well-being, and stability (Maslow, 1943). This tier also describes a basic, innate human motivation. As such, the difference in cultures between the studied population and Maslow himself does not affect the applicability of safety needs. That is, Latino migrant farmworker adolescents require a level of resources, health, and security to operate effectively in the agricultural workforce. In addition, safety needs for these youth also translate into having job opportunities wherein the income they make is sent to parents and families through remittances. Pablo, an 18 year old Mexican youth spoke of why he came to the United States, expressing this type of need: “…necessity, more than anything…[is] of a house, of a car, in order to do…something that there in Mexico one cannot do.” Lucas, a 16 year old Guatemalan youth shared a similar sentiment regarding his health and how he would handle illness: “…if you are sick, how are you going to work…? [I would stay] at home and rest.” Safety needs continue to be a motivation for Latino migrant farmworker youth despite cultural influences of collectivism. Specifically, Latino migrant youth require a sense of security and health to provide for their families. Thus, being young and having employment in U.S. farm work contributed to this youth’s safety.

The most fundamental part of Maslow’s original theory – physiological and safety needs – are appropriate to apply to the Latino migrant youth population as they are universal in nature and are not necessarily influenced by cultural differentiation. Maslow’s proposed tier of the love and belongingness needs, however, is too broad and focused on the elective family than on the blood family to successfully describe the motivation of Latino migrant farmworker adolescents. The youth clearly have a strong bond with the nuclear family which motivates them to continue working despite being in a foreign land. The esteem needs proposed by Maslow (1943) also fail to accurately portray the motivations of Latino migrant farmworker youth, as their collectivistic values emphasize the importance of sacrifice and loyalty to the group over seeking personal recognition or status. Self-actualization should be modified for these youth who work in the present so that they can provide future opportunities to family members and potentially their own offspring. Finally, Latino migrant farmworker adolescents are ultimately motivated to be with their families and being able to support that family financially back in the home country.

The collectivistic cultural influence of Latino migrant farmworker adolescents’ upbringings in their countries of origin challenge what we know of Maslow’s Hierarchy of Needs. The differences found between Maslow’s original theory and the suggestions we make to the hierarchy of needs for Latino migrant farmworker adolescents are an outgrowth of the differences in culture between the United States, Mexico, and Guatemala. Although previous research among Latino/a/x adults has found that Maslow’s theory was not successful in describing the needs of maquiladora workers (Gonzalez, 2011), no research to date that explore whether this theory “fully maps” onto the realities and needs of other ethnic groups. Our findings highlight that the values of an individualistic country significantly differ from those of collectivistic countries in that ties among individuals are loose in individualistic cultures whereas collectivistic cultures value strong loyalty to the in-group (Hofstede, 2010). As values inform human motivations, it is evident that the entirety of Maslow’s Hierarchy cannot be seen as universally applicable. As such, we suggest a revision to this model and recommend more inclusiveness of populations who may pose alternative and meaningful building blocks to this theory.

This exploratory research must be interpreted in light of its limitations. First, we focused on Latino migrant adolescents in the Southeast thus generalizations to all Latino/a/x migrant farmworker adolescents or other groups of ethnic minority youth in the U.S. is not possible. Second, the majority of Guatemalan participants were Mayan whose native tongue was Mam. It is possible that the limited vocabulary in Spanish might have reduced the amount of information they were able to disclose during the interviews. Finally, we focused on young male migrants exclusively. Future research should include the experience of female migrant adolescents to account if the model would vary based on gender and age group. 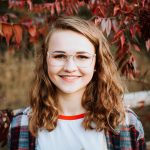 Bethany Moore is from Springfield, Missouri. She is pursuing a degree in International studies – Peace Studies with a minor in Spanish and Public Health.

Dr. Fiorella L. Carlos Chavez received her Ph.D. in Human Sciences from Florida State University and is currently a postdoctoral fellow in the department of Human Development and Family Science at the University of Missouri, Columbia. Her research focuses on the well-being of Latino [im]migrant families and youth in the United States. She is particularly interested on the implications of family, work, and cultural-related stressors on Latino migrant farmworker youth’ development and health. Dr. Chavez is a Principal Investigator for Phase I of a multi-site grant focusing on the health effects of COVID-19 on the Latinx population in the United States. Dr. Chavez has lived, worked, and studied in five different countries, speaks four different languages, and is passionate about undergraduate/graduate research and mentorship. In her free time (if there is such a thing) she explores new coffee shops, watches movies, and goes for walks.