Canonical works of Latino literature draw upon the overarching theme of family connection to tell powerful coming-of-age stories through the perspectives of complex, dynamic characters authentically capturing and portraying Latino identity and culture. Regardless of a specific writer’s nation or culture of origin, Latino bildungsroman narratives consistently focus on how main characters’ coming-of-age experiences relate to his or her family, community and cultural values. Although Latino literature encompasses countless regional differences and distinct points of cultural variation, it consistently combines familism and machismo in bildungsroman narratives.

Sandra Cisneros’ The House on Mango Street, a canonical coming-of-age story in Latino literature, inspired me to write the following two vignettes. Each episode incorporates a specific theme present in Latino bildungsroman narratives. “Noche Buena” focuses on the importance of familism. “When Papa Drinks…” is about toxic masculinity and machismo. The style of the vignettes attempts to mimic Cisneros’ original voice to capture the aforementioned themes in an authentic way. In my initial submission to Artifacts, I included a third vignette, “Mango Says Hello Again,” which is a conclusion to Esperanza’s coming-of-age story. To avoid any potential violations of intellectual property laws, however, I ultimately decided to omit that entry to respect Cisneros.

Although the tonality and key themes from The House on Mango Street were paramount in guiding my writing, I used unique character names in the two vignettes in order to honor Cisneros’ work while still placing my own creative spin on the world she so artfully created. For the third vignette, not included here, I made specific literary references to characters in The House on Mango Street as a way to incorporate a sense of shared history and identity between my imitations and the original text. To avoid intellectual property infringement, I shifted the specific locational setting of my vignettes from “Mango Street” to “Papaya Street” but ultimately decided that paying homage to the canonical street name was vital to respecting such an essential element of Cisneros’ original story.

I, myself, am not of Hispanic or Latino descent, but I have studied Spanish since I was in sixth grade and possess a deep respect for the language and cultural diversity it encompasses. In recognition of the countless mentors who have helped me during my linguistic journey, I used the names of several of my former Spanish teachers for the vignettes’ characters. While the world of the following two vignettes (and the third one not included here) is fictional, an imitation of an already engaging story, the vignettes’ narratives still offer an echo of Cisneros’ compelling bildungsroman morals, which I hope resonate with new readers as much as they did with me.

Mama has been cooking all day. Every corner of the house smells like her famous pozole and bacalao a la vizcaína. It’s Christmas Eve, Noche Buena, the only day all year when Mama and Papa let me eat as much of my favorite foods as I want. Papa doesn’t have to work for two full days during Christmas time, and he spends his evenings telling us all stories of what Noche Buena was like in Mexico.

We sing carols in Spanish and English, forgetting the words and making up our own. “Angels, we would like some pie, sweetly eating all the crust. And the filling in reply, saying ‘please eat all of us.’” Outside there are big grey clouds that promise a fluffy white wonderland in the morning, but for now I keep stringing silver and gold tinsel all around the house.

Every year Mama and Papa give us each one special gift on Noche Buena: a beautiful outfit to go to midnight mass in. These presents are wrapped up with shining bows on them under the small Christmas tree in our living room. Eva is so excited she won’t stop talking about what she hopes her dress looks like until we sit down to eat dinner.

I am old enough this year, so Mama lets me put the baby Jesus in his cradle in the center of Papa’s handmade nativity. It used to be his papa’s. Then we all say grace and eat, savoring every bite. Papa’s favorite part of the meal is Mama’s pavo, and he gives her a kiss on the cheek to say thank you. Once Mama has made sure we have finished cleaning off our plates, she hands out our presents and tells us to get ready for mass.

My dress is dark red with silver snowflakes Mama hand-embroidered. I can’t imagine how long Mama and Papa had to save to afford the velvet fabric, but it is the most gorgeous outfit I have ever seen. Eva looks like an angel in her all-white and gold dress. For the special occasion, we tie matching golden ribbons into each other’s hair.

Squeezed between Mama and Papa in the middle of the pew in La Iglesia de St. Peter at midnight, I feel happier than any gift in the whole world could make me. Mama sushes Esteban and Lupita’s, telling them to pay attention to the sermon, but from the twinkle in her eye and the way she shares a private smile with Papa, I know she’s happy. Feliz Navidad, mi amor, she whispers to him, and he kisses her forehead and squeezes her a little tighter. This is the precious family magic of Noche Buena that only comes once a year.

When Papa drinks, he smells sour, like lemonade without any sugar on a hot summer morning. The taste makes your nose scrunch up and your lips pucker and you want to spit it out onto the sidewalk. But spitting’s not polite, so instead you swallow and say thank you and keep your mouth shut.

Papa doesn’t drink often, but when he does, he stumbles through the front door, slamming it so hard we rush to see what’s the matter. He’ll give me a kiss on the forehead, still reeking of tequila and beer. Mama smooths my hair then tells me they need to talk. From my room, I hear him grumble that he has the right to drink because he’s the man of the house. He says he’s providing for the family, and isn’t he doing enough? He says he’s just blowing off steam and spending time with his compañeros. He says he can stop whenever he wants.

Mama gets real quiet when Papa’s like that. She doesn’t sing or laugh or tuck us into bed with kisses on our forehead. She shrinks in on herself like she’s trying to become invisible. He stomps around the house like a horse with clogs, and if it hadn’t happened a dozen times before, I’d swear he would wake up the whole of Papaya Street with his clomping and huffing about.

The morning after Papa comes home from the bar, Mama’s smile looks a little stiffer than usual. Her laugh sounds thin and has a hollow echo to it like when I fall off the monkey bars and have the wind knocked clean out of my lungs. Mama and Papa talk in hushed voices, and she holds her arms crossed like a shield of flesh and fabric protecting her heart.

Most of the time my feet stay on steady ground. But when Papa drinks the world falls out of balance.

Mama looks like Atlas those days—I read about him in a book at school once—carrying the weight of the entire Earth on her shoulders, unable to set it down even for a moment. She seems a thousand years older.

And each time, after Mama’s tucked me in, I close my eyes and pray to God that Papa will keep his word. I pray it will be his last time. But somewhere along the line God stopped listening. Or maybe he just quit caring. 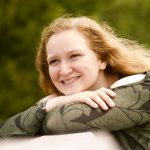 Bailey Stover is a Journalism and Spanish major from Columbia, Missouri. In the future she hopes to join the Peace Corps or a similar organization to work toward sustainable development in other countries, specifically in South and Latin America to make use of her Spanish language skills. Stover plans to write nonfiction novels about the lives of the people she meets whose communities are most directly affected by racism, war, poverty, climate change and inequality. She wants to share the stories of others with the world to promote empathetic understanding and open communication, while inspiring future generations to do the same.